Microsoft has announced the release of version 4.0 of its popular Enhanced Mitigation Experience Toolkit (EMET), a free utility that helps prevent memory corruption vulnerabilities in software from being successfully exploited for code execution.

This latest version has a redesigned user interface and addresses known application compatibility issues (click on the screenshot to enlarge it): 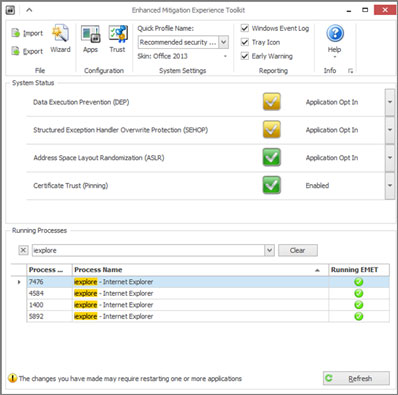 A new exception to the SSL certificate pinning rules has been added. If enabled, it makes EMET verify just the Public Key component of the Root CAs present in the rule without matching subject name and serial number. The Certificate Trust feature has also been made available on 64-bit versions of Internet Explorer, and new rules for Twitter, Facebook, and Yahoo! have been added to the previous default ones for Microsoft online services.

“When an exploitation attempt is detected and blocked by EMET, a set of information related to the attack is prepared with the Microsoft Error Reporting (MER) functionality. For enterprise customers collecting error reports via tools like Microsoft Desktop Optimization Package or the Client Monitoring feature of System Center Operations Manager, these error reports can be triaged locally and used as an early warning program indicating possible attacks against the corporate network,” explained the EMET team two months ago when introducing the beta version of EMET 4.0.

In addition to strengthened mitigation and bypass-blocking techniques, the new version occasionally also allows users to switch to “Audit Mode,” which allows them to report an exploitation attempt but not terminate the application. This option is not on by default.

Finally, Group Policy profiles have been updated to include the ability to configure system and application mitigations, the reporting mechanisms, the advanced mitigation configurations, and the exploit action.

The toolkit can be downloaded here.