The number of phishing campaigns increased by more than 20 percent in the third quarter of 2013, with crimeware attacks evolving and proliferating, according to the APWG. 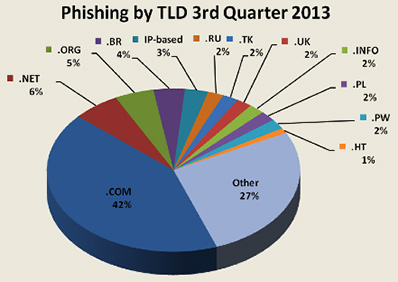 The total number of unique phishing websites observed rose to 143,353 in Q3, up from Q2’s 119,101. The increase is generally attributable to rising numbers of attacks against money-transfer and retail/e-commerce websites.

Attack vectors continued to evolve, placing social media at forefront of crimeware’s vanguard in the quarter. “In the 3rd quarter of 2013, we also saw a change in the phishing themes used by malware authors. An emphasis on social media-themed subjects, such as “Invitation to connect on LinkedIn’, was used to entice users who would be used to seeing such subjects,” said APWG contributor Carl Leonard of Websense Security Labs.

APWG member PandaLabs cataloged nearly 10 million new crimeware samples from July to September, and PandaLabs observed that the number of new malware samples in circulation in the first nine months of 2013 was larger than the total for all of 2012.

More than 59 percent of computers in China appeared to be infected with malware or spyware, a record high for any country.