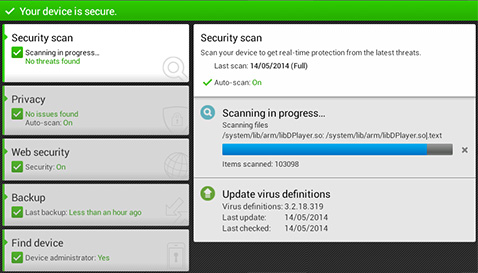 It also scans for and removes malware and looks for other security threats. McAfee makes it simple for users to perform these scans as soon as the product is installed.

According to McAfee’s Consumer Mobile Security Report, 80% of mobile apps today collect location information about users, 82% know the device ID, and 57% track when people use their phones. Additionally, the apps that aggressively and often unnecessarily collect data leverage potentially dangerous ad libraries, and 35% of these apps contain malware.

McAfee Mobile Security’s privacy scan provides key intelligence about the apps users have installed on a smartphone or tablet. The scan determines how much information each app is able to access and share, then ranks them by level of privacy sensitivity, while also checking for risky URL associations. When an app behaves significantly different than others in its category, the level of risk is raised and reflected in its privacy sharing score. At the conclusion of the privacy scan the user can uninstall suspicious apps with one-click.

The most worrisome permissions are apps that read users’ subscriber ID from their smartphones and tablets, anything that gets users’ precise location (as opposed to Wi-Fi network or cell tower), and anything that reads or tracks text messages that can contain private messages and information like online banking transaction authorizations. To provide a deeper level of protection, the new version of McAfee Mobile Security instantly scans Android apps, files, SD cards and Internet downloads for malware using a method optimized for mobile to be light on resources and battery life.