Google is done with tolerating sneaky ad injectors and, following the results of a study they recently conducted, they removed from the Chrome Web Store 192 deceptive Chrome extensions that affected 14 million users.

“Ad injectors are programs that insert new ads, or replace existing ones, into the pages you visit while browsing the web,” explains Nav Jagpal, a software engineer for Google’s Safe Browsing program. And the aforementioned study showed that more than 5% of people visiting Google sites have at least one ad injector installed.

Google’s Safe Browsing program warns users when they are about to visit sites that might push deceptive ad injectors on to users: 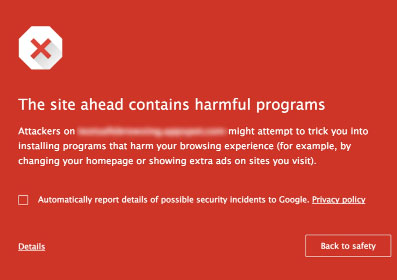 To be sure, not all ad injectors are unwanted – sometimes users explicitly chose to install them. But, more often than not, users are tricked into installing them, either via deceptive advertising or as part of a software bundle.

In fact, of all the checked Chrome extensions injecting ads, 34 percent can be classified as malware, their study found.

Apart from being annoying and intrusive, ad injection can also be a security risk (see the recent “Superfish” incident). Also, many advertizers and publisher are not fond of them, as the former often don’t know their ads are being injected, and the latter aren’t being compensated for these ads.

Of course, ad injector extensions are not limited to Google Chrome – there are many aimed at users of other popular browsers, as well.

Google has done well to clean up its Chrome Web Store, and thanks to new detection techniques, malicious ad-injectors will be more easily spotted among the new and updated extensions submitted.