Researchers at Context Information Security have demonstrated how easy it is to monitor and record Bluetooth Low Energy signals transmitted by many mobile phones, wearable devices and iBeacons, including the iPhone and leading fitness monitors, raising concerns about privacy and confidentiality. The researchers have even developed an Android app that scans, detects and logs wearable devices. 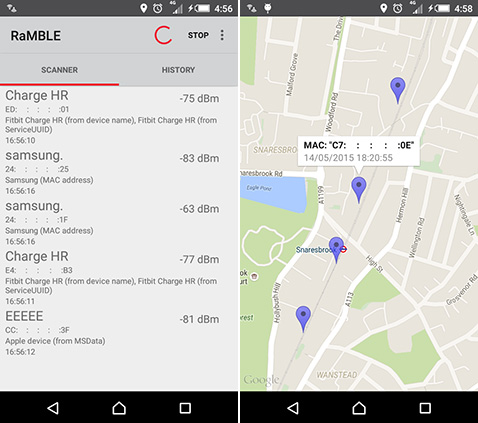 The Context findings follow recent reports that soldiers in the People’s Liberation Army of China have been warned against using wearables to restrict the possibility of cyber-security loopholes. “Many people wearing fitness devices don’t realize that they are broadcasting constantly and that these broadcasts can often be attributed to a unique device,” said Scott Lester, a senior researcher at Context.

“Using cheap hardware or a smartphone, it could be possible to identify and locate a particular device – that may belong to a celebrity, politician or senior business executive – within 100 meters in the open air. This information could be used for social engineering as part of a planned cyber attack or for physical crime by knowing peoples’ movements.”

Bluetooth Low Energy (BLE) was released in 2010 specifically for a range of new applications that rely on constantly transmitting signals without draining the battery. Like other network protocols it relies on identifying devices by their MAC addresses; but while most BLE devices have a random MAC address, Context researchers found that in most cases the MAC address doesn’t change.

“My own fitness tracker has had the same MAC address since we started the investigation, even though it’s completely run out of battery once,” said Lester. Sometimes the transmitted packets also contain the device name, which may be unique, such as the ‘Garmin Vivosmart #12345678’, or even give the name of the user, such as ‘Scott’s Watch’.

BLE is also increasingly used in mobile phones and is supported by iOS 5 and later, Windows Phone 8.1, Windows 8, Android 4.3 and later, as well as the BlackBerry 10. The Bluetooth Special Interest Group (SIG) has predicted that, “By 2018, more than 90 percent of Bluetooth enabled smartphones are expected to be Smart Ready devices,” supporting BLE; while the number of Bluetooth enabled passengers cars is also predicted to grow over to 50 million by 2016.

iBeacons, which also transmit BLE packets in order to identify a location, are already used in Apple Stores to tailor notifications to visiting customers, while BA and Virgin use iBeacons with their boarding pass apps to welcome passengers walking into the lounge with the WiFi password. House of Fraser is also trialling iBeacons on manikins to allow customers to look at the clothes and their prices on their phones. The current model for iBeacons is that they should not be invasive; you have to be running the application already, for it to detect and respond to a beacon. But the researchers have concerns: “It doesn’t take much imagination to think of a phone manufacturer providing handsets with an iBeacon application already installed, so your phone alerts you with sales notifications when you walk past certain shops,” said Lester.

The current version 4.2 of the Bluetooth Core Specification makes it possible for BLE to implement public key encryption and keep packet sizes down, while also supporting different authentication schemes. “Many BLE devices simply can’t support authentication and many of the products we have looked at don’t implement encryption, as this would significantly reduce battery life and increase the complexity of the application,” said Lester.

“It is clear that BLE is a powerful technology, which is increasingly being put to a wide range of uses,” concludes Context’s Lester. “While the ability to detect and track devices may not present a serious risk in itself, it certainly has the potential to compromise privacy and could be part of a wider social engineering threat. It is also yet another demonstration of the lack of thought that goes into security when companies are in a rush to get new technology products to market.”
More about
Share this