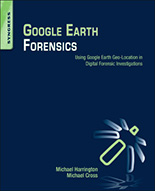 Learn how to use Google Earth geo-location in your digital forensic investigations.

Michael Harrington is a former Law Enforcement officer. He lectures on mobile forensics around the world and has been involved in various forensic projects including Pandora’s Box and WOLF.

Michael Cross is an Internet specialist/computer forensic analyst with the Niagara Regional Police Service. He has consulted and assisted in cases dealing with computer-related/Internet crimes.

If you never used Google Earth (GE), the first two chapters of this book will be helpful. The first one will walk you through what GE is, what it can be used for, which flavor of the tool is best for your needs, and how to install it.

By now, you should already have installed a free trial version of GE Pro, so that you can try out the explained capabilities directly. Chapter 2 contains a short and sweet overview of the configuration and navigation options, as well as instructions on how to use the menus and tools, and views and elements offered in it.

Next you will learn how to import data from units using the global positioning system (GPS) and the geographic information system (GIS) into Google Earth, and how to use geo-location information contained in pictures to identify the location where they were taken.

Chapter 4 will introduce you to the type of files used by GE to display data – KML, XML, HTML – and how to manipulate them. While you’re probably familiar with HTML and XML, KML (Keystone Markup Language) is used to display geographic data in GE, and has been developed expressly for the tool. The chapter does not teach everything about these three markup languages, but offers links that will come in hand for those who wish to know more.

Chapter 5 starts the second part of the book. Users will get familiar with what digital forensics is and how it’s performed so that the results can be useful for investigators and accepted by courts of law.

The chapter explains how GE can be used in the various stages of the digital forensic process, and provides information about the various tools you can use to recover and acquire evidence, and about the file converters that you will need in order to be able to input usable data into GE. Helpful advice on how to organize your case is also provided, as well as details about the limits of GE, which you should be familiar with.

All these chapters were good preparation for the last one, which illustrates the practical application of GE forensics by going through a scenario based on a case. I would argue that this is what a potential buyer of the book needs to skim through when deciding whether or not to get it – it will show what kind of insights GE can provide and how it can be used to make the case cleared both for the investigators and for judges and juries.

This is a short tome, but if you want to learn how to exploit Google Earth for criminal and other investigations, it’s more than enough to get you started. The authors did a good job explaining the subject matter in a way that will not get you yawning half way through the book.