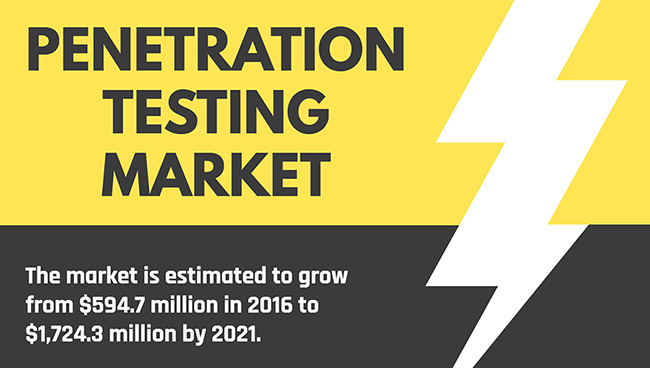 This market is growing rapidly because of the growing security needs of IoT and BYOD trends and increased deployment of web and cloud-based business applications.

“Penetration testing still remains valuable in the private sector. New industries are constantly being targeted as criminals continue to monetize the data,” Charles Henderson, Global Head, IBM X-Force Red, told Help Net Security. “Take healthcare for example, in 2015 we saw more than 113 million medical records stolen. Healthcare organizations are loaded with medical devices that are often connected to the Internet and difficult to maintain, multiple different processing systems for billing, etc. These systems require regular penetration testing to stay ahead of the bad guys, often looking for a way to pivot into an organization.”

Wireless penetration testing to grow the most

It’s no wonder that many organizations take advantage of penetration testing services to secure their wireless infrastructures, and the devices connected through it.

“The network becomes more valuable as more nodes are connected to it. With the explosion of IoT the new exponential network value will have significantly increasing demands to protect that value. The market for cyber security services and products should echo the device and value increase generated by IoT,” said Kenneth F. Belva, principle of IoTcrusher.com.

Government & Defense vertical to have the largest market size in 2016

The penetration testing market is also segmented by various industry verticals; out of which, the adoption of penetration testing services is expected to be the highest in the government and defense vertical as the critical data and applications used by the vertical are prone to advanced threats. Moreover, BFSI, retail, and IT & telecom verticals are expected to gain traction during the forecast period.

“As more and more organizations move to the cloud and adopt SaaS businesses models we see a move to agile development methods. Applications are today a moving target which require more agile security testing processes as well. We therefore see the cadence of penetration testing to go up from one time a year to quarterly and trending towards more continuous pen testing,” said Jacob Hansen, CEO at Cobalt.

North America is expected to dominate the market this year

The market in APAC is expected to grow at the highest CAGR between 2016 and 2021. The major driving forces for this growth are increasing technological adoption and huge opportunities across industry verticals in APAC countries, especially India and China.