Unsurprisingly, the Q3 2016 ThreatMetrix report shows a sharp increase in the number and complexity of cyber attacks. During what is traditionally a slow quarter, researchers analyzed nearly 5 billion transactions, and stopped approximately 130 million attacks in real time – a 40 percent increase over 2015. 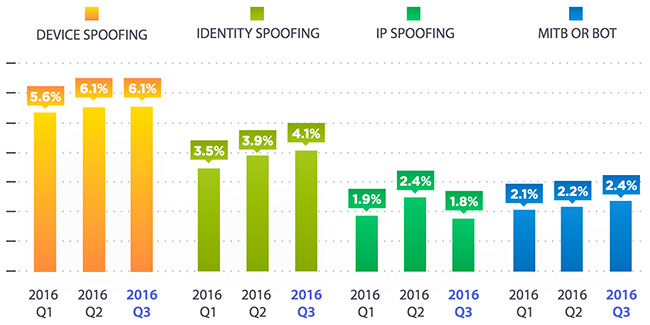 The evolving anatomy of a fraud attack

Fraudsters’ ability to pose as legitimate customers is one of the greatest challenges faced by global digital businesses, as this can lead to an increase in account takeover and new account creation fraud – both of which are on the rise.

New account creations are rejected at a rate of one in ten transactions, demonstrating a widespread and pernicious use of stolen identity credentials. Stolen identities are often stitched together using a patchwork quilt of data elements harvested from separate breaches, then repackaged and sold at a premium.

E-commerce: As digital e-commerce transactions have grown, bot attacks continue to be widespread and persistent, often nearly equaling legitimate customer traffic. Q3 2016 saw 76 million blocked e-commerce transactions – a 60 percent increase over the third quarter 2015. Attacks on logins and payment transactions grew 30 percent and 70 percent, respectively, over the previous year — a trend that will likely pick up steam into the 2016 holiday season.

Digital media/social networks: Blocked transactions rates for media are growing quarter-on-quarter as fraudsters test stolen credentials on sites that traditionally have modest sign-up and authentication requirements. Attacks on new account creations have gone up by almost 400 percent compared to Q3 2015.