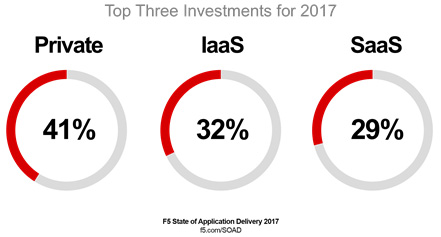 As an increase in application services often requires additional resources, respondents also indicated a shift toward DevOps methodologies to gain operational efficiencies through automation and programmability. This need for scalability replaces speed to market as the prime driver of DevOps adoption.

“This past year, not a week went by without some hack or vulnerability making the headlines,” said Ryan Kearny, CTO at F5. “And yet there is no sign that security breaches are slowing businesses’ digital transformation—quite the opposite in fact. This report shows how the sometimes-competing demands of customer and data protection inform companies’ deployment of apps and app services.”

Survey responses came from around the globe, spanning industries like government, financial services, technology, and education. Respondents’ roles ranged from infrastructure, IT security, application development, and DevOps to the executive suite.

The increasing sophistication of attacks is the top challenge

Security teams are expanding beyond traditional firewalls and the legacy enterprise perimeter as a response to hackers increasingly targeting the application. Globally, the top security services being planned for deployment are DDoS mitigation (21 percent), DNSSEC protection (25 percent), and Web Application Firewall services (20 percent).

According to the survey, companies—including those identifying as cloud-first organizations—that are most confident in their ability to withstand an application-level attack have a WAF installed.

2017 will usher in an era of cloud expertise

It’s a multi-cloud world today, with four out of five respondents adopting hybrid cloud, and nearly one-third (32 percent) of respondents stating they will purchase public cloud IaaS solutions this year, up dramatically from 25 percent in 2016. Furthermore, the more apps a company has deployed, the greater motivation to reap the operational benefits of the cloud, with respondents running the largest number of applications (3,000+) reporting the highest percentage of apps in the cloud.

The number of deployed app services continues to rise

Operational scale and programmability rise to the top for DevOps

With increases in app services and the continued expansion of cloud, organizations are turning to automation and orchestration to scale operations across environments. As a result, over half of respondents now view API-enabled infrastructures and templates as important, up from 31 percent and 22 percent last year, respectively.

Scalability and OpEx reduction remain the top two drivers for the use of SDN frameworks, and companies are increasingly showing a tendency toward standardization, with 39 percent relying on only one framework in 2017, compared to 32 percent in 2016.