40 percent of organizations believe that C-level executives, including the CEO, are most at risk of being hacked when working outside of the office, according to a new report from iPass. Cafés and coffee shops were ranked the number one high-risk venue by 42 percent of respondents, from a list also including airports (30 percent), hotels (16 percent), exhibition centers (7 percent) and airplanes (4 percent). 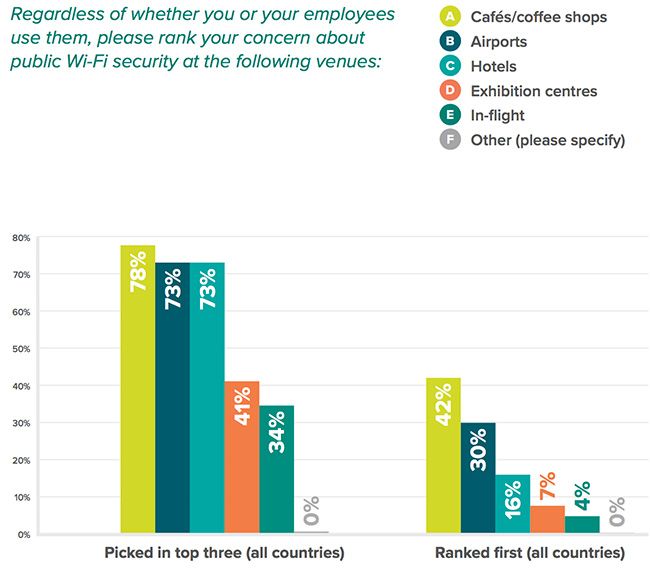 The vast majority (93 percent) of respondents said they were concerned about the security challenges posed by a growing mobile workforce. Almost half (47 percent) said they were ‘very’ concerned, up from 36 percent in 2016.

The perils of free Wi-Fi

“The grim reality is that C-level executives are by far at the greatest risk of being hacked outside of the office. They are not your typical 9-5 office worker. They often work long hours, are rarely confined to the office, and have unrestricted access to the most sensitive company data imaginable. They represent a dangerous combination of being both highly valuable and highly available, therefore a prime target for any hacker,” said Raghu Konka, VP of engineering at iPass. “Cafés and coffee shops are everywhere and offer both convenience and comfort for mobile workers, who flock to these venues for the free high speed internet as much as for the the coffee. However, cafés invariably have lax security standards, meaning that anyone using these networks will be potentially vulnerable.”

Man-in-the-middle attacks, whereby an attacker can secretly relay and even alter communications without the mobile user knowing, were identified by 69 percent of organizations as being of concern when their employees use public Wi-Fi. However, more than half of respondents also chose a lack of encryption (63 percent), unpatched operating systems (55 percent), and hotspot spoofing (58 percent) as chief concerns.

Highlights from the report and regional trends

“Organizations are more aware of the mobile security threat than ever, but they still struggle to find the balance between security and productivity,” continued Konka. “While businesses understand that free public Wi-Fi hotspots can empower employees to do their job and be more productive, they are also fearful of the potential security threat. Man-in-the-middle attacks were identified as the primary threat, but the entire mobile attack surface is getting larger. Organizations must recognize this fact and do their best to ensure that their mobile workers are securely connected.”

“Sadly, in response to this growing threat, the majority of organizations are choosing to ban first and think later. They ignore the fact that, in an increasingly mobile world, there are actually far more opportunities than threats. Rather than give in to security threats and enforce bans that can be detrimental or even unenforceable, businesses must instead ensure that their mobile workers have the tools to get online and work securely at all times.”