Legitimately signed but backdoored versions of the popular CCleaner utility were available for download from the developer’s Web site and servers for nearly a month, Cisco Talos researchers have discovered.

It is still unknown how the compromise happened. Piriform – the company that develops CCleaner and which has been recently acquired by AV maker Avast – has confirmed that the 32-bit version of the v5.33.6162 of CCleaner and the v1.07.3191 of CCleaner Cloud were affected.

Piriform boasts of over 5 million weekly CCleaner desktop installs. “If even a small fraction of those systems were compromised an attacker could use them for any number of malicious purposes,” Cisco researchers noted.

An instance of a backdoored CCleaner version has been first flagged by Cisco, while customer beta testing their new exploit detection technology.

The flagged executable was signed with a valid digital certificate issued to Piriform, but came with an additional payload.

Paul Yung, VP of Products at Piriform, explained that it was “a two-stage backdoor capable of running code received from a remote IP address on affected systems.”

The backdoor also collected information about the target systems (name of computer, its IP address, list of installed software, list of running processes, etc.) and sent it, encrypted, to a remote server located in the USA. 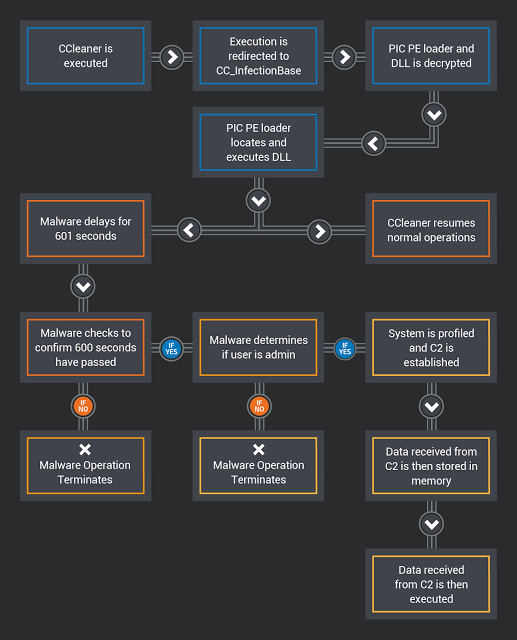 “We have no indications that any other data has been sent to the server. Working with US law enforcement, we caused this server to be shut down on the 15th of September before any known harm was done,” the company stated.

Piriform and Avast continue the investigation in order to find out how this compromise happened, who did it, and the hackers’ ultimate goal.

They didn’t say it, but it’s likely that they’ve used a new digital certificate to sign these latest versions.

As Cisco researchers noted: “The presence of a valid digital signature on the malicious CCleaner binary may be indicative of a larger issue that resulted in portions of the development or signing process being compromised. Ideally this certificate should be revoked and untrusted moving forward. When generating a new cert care must be taken to ensure attackers have no foothold within the environment with which to compromise the new certificate. Only the incident response process can provide details regarding the scope of this issue and how to best address it.”

Antivirus detection for the threat is extremely low, so even if you have downloaded and installed one of the affected CCleaner versions, your computer has likely been backdoored.

“Affected systems need to be restored to a state before August 15, 2017 or reinstalled. Users should also update to the latest available version of CCleaner to avoid infection,” Cisco advises.

Supply chain attacks are a very effective way to distribute malicious software, as we have witnessed in the NotPetya attack: the ransomware/wiper was traced back to hacked servers of Ukrainian software maker MeDoc. Unfortunately, end users can’t do much about that – it’s on the developers to keep their servers secure and clean.

UPDATE: Piriform estimated that the number of people who used the affected software is around 2.27 million.