The National Cyber Security Alliance (NCSA) conducted a study to better understand teens and parents’ attitudes, concerns and knowledge base about online safety and privacy and how they view their own responsibility to keep themselves safe while on the Internet. 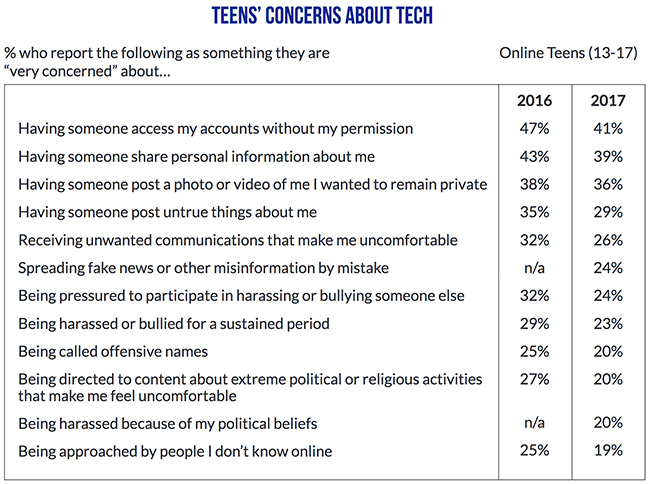 The issue of fake news

Teens and parents both think they spend too much time online

Smartphones are now ubiquitous in teens’ lives (82% of teens own a smartphone, 67% have a laptop and 48% have a tablet) but constant mobile connectivity comes with a cost. Close to a third (28%) say they spend “too much time” online. Parents were also concerned about their own screen time, with 22 percent saying they spend too much time online.

Who is the family Chief Security Officer?

Boys were much more likely to identify themselves as the household authority on cybersecurity and privacy than girls (42% vs. 27%); and girls were more likely to point to mom as the household cybersecurity authority than boys (25% vs. 11%). When parents were asked who is the most knowledgeable, 66 percent said they are, 21 percent say their partner is, and six percent say their children are.

Most teens are expected to follow at least some rules about their technology use. The most common rules teens report are restrictions on being connected during dinner (42%), limits on sharing passwords with friends (33%) and requirements that they report any online incidents that make them feel scared or uncomfortable (30%).

When teens were asked what kinds of rules they would also want their parents to follow, they felt there should be limits on the kind of social media content parents can post (38%). Teens also indicate that think their parents should not be allowed to use their devices at dinner (53%) and should not share passwords with friends (49%).

Parents are a critical resource for online safety and security

The survey also highlights a range of concerns teens and parents have about technology and being safe online, which range from fake news to online bullying and unauthorized access to their accounts:

Security, safety and privacy concerns: Similar to last year’s survey, teens and parents are aligned on their top three concerns affecting online teens (ranked as something they are “very concerned” about), which are:

Bullying and online harassment: Twenty-three percent of teens report that they have been harassed or bullied for a sustained period of time on the internet, and 24 percent say they were pressured to participate in harassing or bullying someone else online. Additionally, 20 percent say they had been harassed because of their political views, a category new to this year’s survey.

Girls are more likely than boys to say that the mean or cruel messages were related to their appearance (41% vs. 29%) or their sexual orientation (24% vs. 14%), while boys were more likely than girls to report meanness and cruelty associated with their political beliefs (24% vs. 15%).

Parents not fully aware of teens’ online lives: The majority of online teens continue to engage in online activities that their parents don’t know about; 57 percent say they have created an account that their parents are unaware of, such as for a social media site or an app they wanted to use.

While teens and parents clearly diverge in a number of areas, they appear to have similar interests in learning about online safety issues. For both parents and teens, learning how to prevent identity theft is their top online concern and keeping devices secure and concerns about ransomware and malware also ranked high.

Teens also ranked consistently as high or higher than parents in showing interest in topics focused on preventing security breaches, such as phishing (teens, 31% vs. parents, 27%), website security (29% vs. 24%) and creating better passwords (22% vs. 14%) ‒ indicating a strong desire to be more aware of how to implement the basics of cyber hygiene critical to staying safe online.