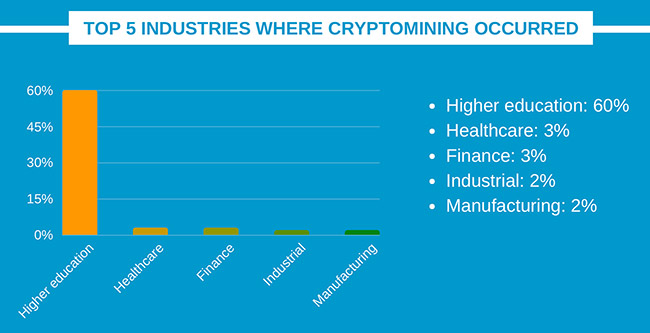 As cyberattackers automate and increase the efficiencies of their own technology, there is an urgent need to augment information security with detection and response tools to stop threats faster.

Cryptocurrency mining is a mounting problem

Considered opportunistic, mining surged with the rising price of cryptocurrencies like Bitcoin, Monero and Ethereum. Of all the cryptocurrency mining detections, 85% occurred in higher education, followed by entertainment and leisure (6%), financial services (3%), technology (3%), and healthcare (2%). Free electrical power and Internet access for students might account for the spike in higher education.

Government and technology sectors have the lowest detection rates, with 496 and 349 detections per 10,000 devices, respectively. This could indicate the presence of stronger policies, mature response capabilities and better control of the attack surface.

When normalizing detections per 10,000 devices compared to the previous year, there is a sharp increase in every industry – C&C (37%), internal reconnaissance (31%), lateral movement (24%), and a nominal increase with data exfiltration detections (6%).