Webroot found that businesses in the U.S., U.K. and Australia are taking cybersecurity seriously – with almost 100 percent of respondents conducting some form of employee cybersecurity training. However, despite these efforts, 79 percent say they aren’t completely ready to manage IT security and protect against threats. 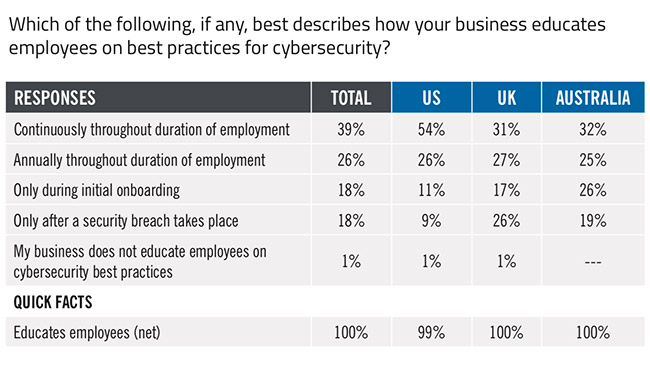 In a study of 600 IT decision makers (ITDMs) at small- to medium-sized businesses (SMBs), Webroot found that the attacks organizations believed themselves to be most susceptible to in 2017 are rapidly shifting in 2018, while the estimated cost of a breach is decreasing.

Phishing displaces new forms of malware globally as the No. 1 attack that ITDMs believe their organizations are most susceptible to in 2018.

U.S. ITDMs think their business will be most susceptible to phishing threats (56 percent), while the U.K. fears ransomware attacks (44 percent) and Australia DNS attacks (52 percent).

Although almost 100 percent of businesses train employees on cybersecurity best practices, that figure drops to half or a third when asked about training “continuously,” which is vital for effectiveness. This leads to the next stat, 79 percent can’t say they are “completely ready to manage IT security and protect against threats.”

The cost of a breach drops

While breaches continue to proliferate, the estimated cost of a breach may be on the decline. ITDMs estimate a cyberattack in which their customer records or critical business data were lost would cost an average of: 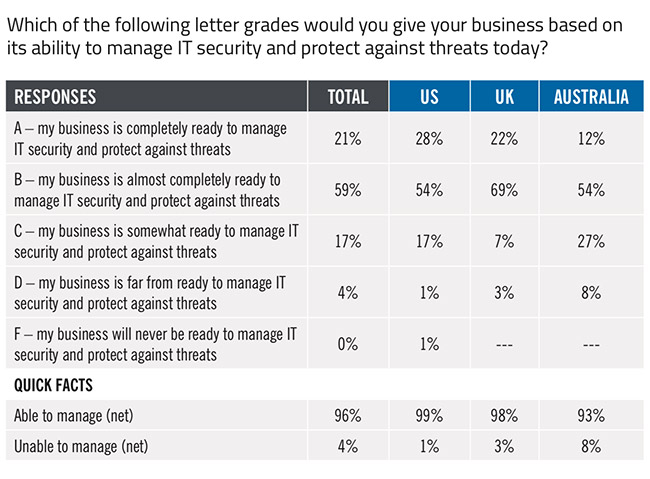 Always be educating. With threats continuously evolving, so must employee cybersecurity training. Training during onboarding isn’t enough. Employees need ongoing training to address the latest and most dangerous attacks.

Don’t forget about mobile. BYOD is now a reality for many companies. And while everyone wants to be connected, unknown devices brought in by employees also bring in unknown risks to the network. Finding a balance between providing employees corporate access and ensuring information security requires device control policies, device-level security and mobile workforce security training.

Email from my boss or my attacker? Phishing is the top attack vector, with cybercriminals becoming sneakier than ever. Even if the sender looks familiar, be sure to check the senders email address is legitimate and don’t click unknown links in social media, email, or text. Regular phishing attack simulations maximize awareness of different phishing methods and minimize the many consequences.

Evaluate your risk profile. Every business has different risk factors. If you don’t have the expertise, an MSP can assess your security posture and work with you to develop a plan for ongoing risk mitigation.

Plan for the worst. Develop a data breach response plan that includes security experts to call and a communications response plan to notify customers, staff, and the public. Make sure you are regularly backing up your data with hard data and offline versions. Remote computer backup could be vulnerable from ransomware and other threats if not ‘air gapped’. Research by the Better Business Bureau revealed that 50 percent of SMBs would operate at a loss within a month of a total data loss incident.