93 percent of security professionals are concerned about cyber-attacks targeting election infrastructure and data, and 81 percent believe cyber criminals will target election data as it is transmitted by machines, software and hardware applications, from local polling stations to central aggregation points, a recent study by Venafi has revealed. 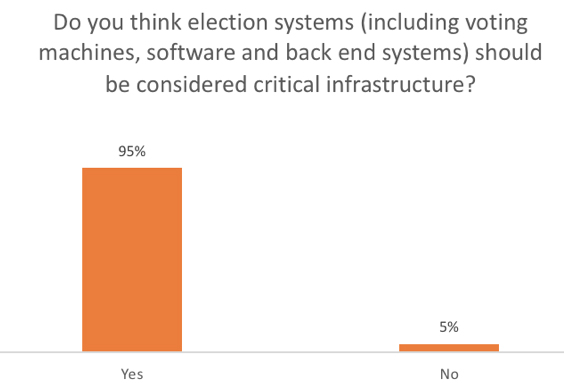 “While these findings were disturbing, conference attendees only examined a small portion of election infrastructure. It’s clear to nearly all security professionals that the back-end systems that transmit, aggregate, tabulate, validate and store election data are at least as vulnerable to cyber-attacks as voting machines.”

Earlier this month, a grand jury issued a detailed indictment on international interference during the 2016 US presidential election. Details in the indictment indicate that nation-state actors utilized encrypted tunnels to target vulnerabilities in election infrastructure, along with other attack methods.

“This is just one reason why governments around the world need to make the security of all encrypted, machine-to-machine communication their top concern.”

Conducted by Dimensional Research in July 2018, the study included responses from 411 IT security professionals in the US, UK and Australia.