Pindrop released its annual report detailing developments in fraud, the future of voice and the impact to customer service across various industries. In the report, Pindrop reveals the rate of voice fraud climbed over 350 percent from 2013 through 2017, with no signs of slowing down. 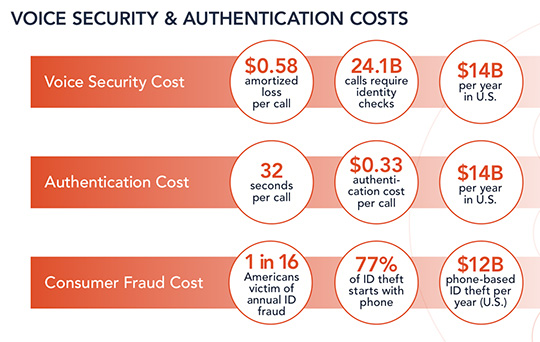 Additionally, between 2016 and 2017, overall voice channel fraud increased by 47 percent, or one in every 638 calls. The year-over-year increase can be attributed to several causes, including the development of new voice technology, the steady uptick in significant data breaches, and acts of fraud across multiple channels.

Advancements in voice technology are not without consequence. The average fraudster’s toolbox is more advanced than ever, thanks to developments in machine learning and AI technology. Pindrop found fraudsters are increasingly leveraging techniques like imitation, replay attack, voice modification software and voice synthesis, often with great success.

“The opportunity for voice to serve as a primary interface is becoming a reality due to integrations with IoT devices, the takeoff of voice assistants and more,” said Pindrop CEO Vijay Balasubramaniyan. “In turn, advanced voice technology is falling into the hands of bad actors and we’re seeing a dramatic spike in voice fraud.”

While fraudsters attack call centers across industries, the increase year over year was most dramatic in the insurance industry, with a 36 percent increase, followed by banking, with a 20 percent increase. Additional industry stats include:

Insurance fraud is more complex and ultimately more costly than banking fraud. It generally requires more calls and takes more time, but the payout can be greater. Fraudsters are willing to invest more time, because of the potential gains from personal pension plans, 401k and life insurance policies. Insurance companies have seen a 248 percent increase in fraud since 2015.

Unsurprisingly, bank fraud is a lucrative business. From 2016 to 2017, the fraud rate in the phone channel increased by 20 percent, and by 269 percent from 2014 to 2017. While credit unions saw about half the rate of banks, Pindrop discovered 80 percent of fraudulent calls to credit unions are domestic in origin compared to 43 percent of bank fraud in general.

The retail industry continues to be hit with the highest rates of fraud overall, and further experiencing a 15 percent increase in the voice fraud rate from 2016 to 2017. Since 2014, the retail industry fraud rate has increased 134 percent, as more sales take place online, over the phone and through omnichannel processes.

Card issuers saw a smaller but still steady increase in fraud rates of 14 percent from 2016 to 2017 and just 24 percent since 2014. Fraudsters attacking card issuers tend to use an even mix of cell phone and VoIP to make those calls.

Brokerages saw slower increase of fraud, of just 4.5 percent between 2016 and 2017, but there has been a steady increase of 78 percent over four years, indicating brokerages are still a profitable target for fraudsters.

Despite annual increases, the threat of fraud is unlikely to deter businesses from integrating voice technology in their solutions. According to ​a survey​ of business and technology leaders, 88 percent believe that voice technology will give them a competitive advantage in improving their customer experience. Twenty-eight percent of those surveyed have already adopted voice technology to improve customer experience, with 57 percent more planning to deploy in the next year. As voice technology continues to advance and become a part of daily interactions, business leaders will need to explore how they’re keeping customers and their data safe.