Riskified surveyed 5,000 US-based consumers aged 18 and older about their online shopping behaviors, experience with and prevalence of credit card fraud, repeat shopping likelihood and customer satisfaction to develop a full picture of how consumers react to a number of common shopping experiences. 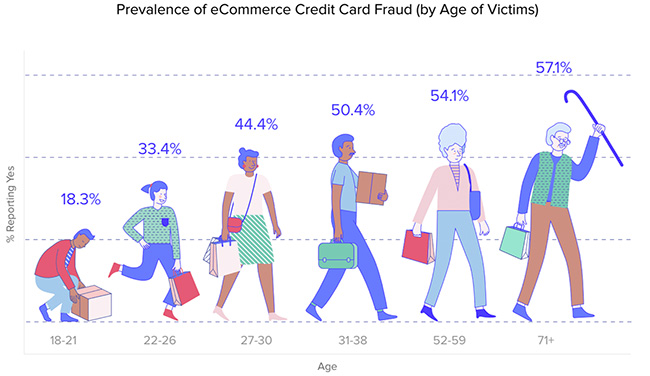 The results are worrisome for both consumers and merchants, as roughly half of respondents reported experience with credit card fraud and 30% had their purchase wrongly declined, with a corresponding negative impact on their satisfaction and return shopping.

Unfortunately for merchants, the obvious costs of fraud aren’t the only costs. 49% of customers reported that they do not return to an online retailer after a fraud incident has taken place, meaning that the merchant will pay the cost of the fraud and lose future customers.

But that’s only part of the cost of fraud. Merchants often decline orders out of caution, and previous research conducted by Riskified found that fear of fraud costs even more than the fraud itself, as merchants unnecessarily reject good customers. This survey bears that out, as 30% of respondents reported having an order declined, and 57% of those declines happen to returning customers, squandering the good will merchants had built. The survey further found that roughly 42% of shoppers who experienced a decline moved on, either abandoning the purchase completely (28%) or shopping with a competitor instead (14%).

Even shoppers who aren’t declined may move away from a purchase. 84% of respondents reported abandoning an order before completing the purchase, with many of these shoppers blaming the checkout process. 37.3% abandoned a purchase because of a complicated checkout, while 34.9% blamed a bad mobile experience.

“It’s really difficult for any single retailer to effectively manage their fraud, and this survey shows just how damaging it is when they fail to do so,” said Eyal Raab, vice president of business development. “Merchants need to be able to meet their customers where and how they want to shop, but offering options like omnichannel fulfillment or digital gift cards opens them up to threats. Making accurate decisions and approving good orders not only increases revenue now, it also makes happier, more loyal customers in the future.”

Impact of household income on fraud and reimbursement: