The Biometric Consumer Sentiment Survey of more than 1,000 U.S. adults who have experience using biometrics to log into their accounts, reveals an increased appetite for the technology. 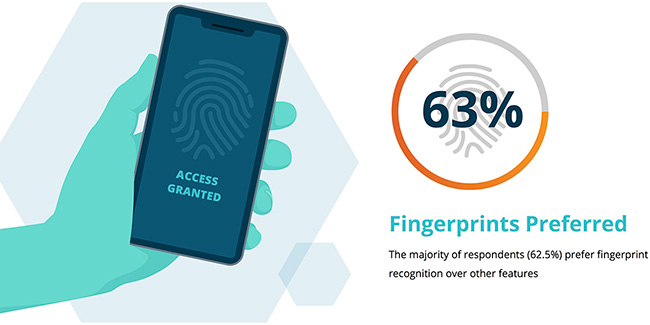 “The pace of mobile device innovation is moving at lighting speed, and as a result, we’ve seen an uptick in the adoption of biometric technologies in consumer-facing apps,” said James Stickland, CEO, Veridium. “With biometric authentication becoming more mainstream, enterprises are well positioned to introduce the technology to their employees to create a fast, secure and frictionless experience when logging into workplace networks and applications.”

While enterprises began introducing biometrics into the authentication process decades ago, the introduction of the technology into mobile devices was the catalyst for the consumerization of biometric authentication. The first publicly available cell phone to include a fingerprint sensor was available in 2011 on the Motorola Atrix 4F. Since then, the consumerization of the technology has exploded:

As more consumers consent to using biometrics, it’s critical that companies clearly communicate how they’re using and storing this personally identifiable information (PII). When asked if they believe companies are storing their biometrics in an ethical way, more than half of respondents (57 percent) are either unsure or neutral. Only about a third of respondents (35 percent) agree or strongly agree that their biometric data is being stored ethically.

It’s important for companies to be transparent about how PII is being stored, as uncertainty could hinder adoption. This is a missed opportunity by companies, as multi-factor authentication leveraging biometrics can be a very effective layer of security, mitigating the impact of passwords stolen in data breaches or instances of identity theft.

These are scenarios that consumers know all too well, with 38 percent of survey respondents confirming that they have been victim of a data breach. Forty-four percent of respondents believe that replacing traditional passwords and PINs with biometric authentication would better protect their personal information.

While the majority of survey respondents (70 percent) would like to expand use of biometric authentication into the workplace, their preferences for doing so differs widely according to age.