There has been a worldwide rise in mobile access for consumers and business users. The expanded reach and quality of mobile broadband has fostered a seemingly insatiable demand for mobile communications, media and a wide range of mobile IoT applications. 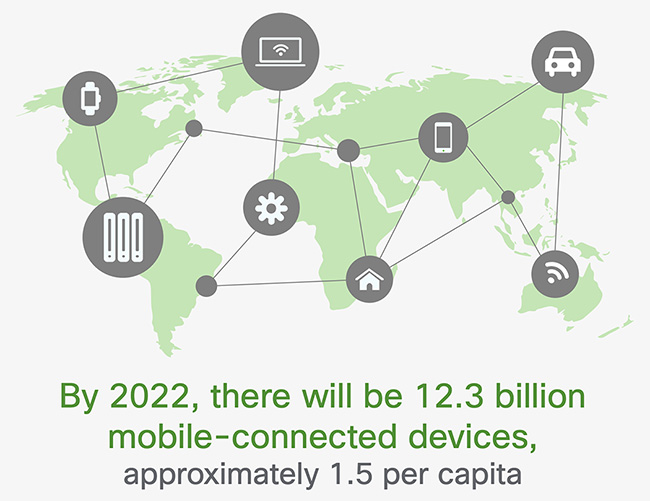 According to this year’s forecast update (2017 – 2022), mobile traffic will be on the verge of reaching an annual run rate of a zettabyte by the end of the forecast period. By 2022, mobile traffic will represent nearly 20 percent of global IP traffic and will reach 930 exabytes annually. That’s nearly 113 times more than all global mobile traffic generated just ten years prior, in 2012.

Mobile technologies continue to connect more people and things than ever before. In 2017, there were five billion mobile users worldwide, but over the next five years, that number will increase by half a billion to 5.5 billion users, which represents about 71 percent of the global population.

The forecast update also anticipates ongoing efforts by mobile carriers around the world to enhance mobile network performance. The average global mobile network speeds will increase more than three-fold from 8.7 Mbps in 2017 to 28.5 Mbps by 2022. Average mobile speeds vary significantly by geographic locations as 5G adoption begins to ramp up in some regions.

“Cisco is committed to helping network operators meet the growing bandwidth needs of mobile consumers, business users and the diverse collection of IoT applications,” said Jonathan Davidson, senior vice president and general manager, Service Provider Business, Cisco. “As global mobile traffic approaches the zettabyte era, we believe that 5G and Wi-Fi will coexist as necessary and complementary access technologies, offering key benefits to our enterprise and service provider customers to extend their architectures. We look forward to ongoing discussions with customers next week at Mobile World Congress Barcelona on preparing for this growth and mapping out their network architecture transitions.”