CIOs and CISOs around the world have held back from implementing critical measures that keep them resilient against disruption and cyber threats. 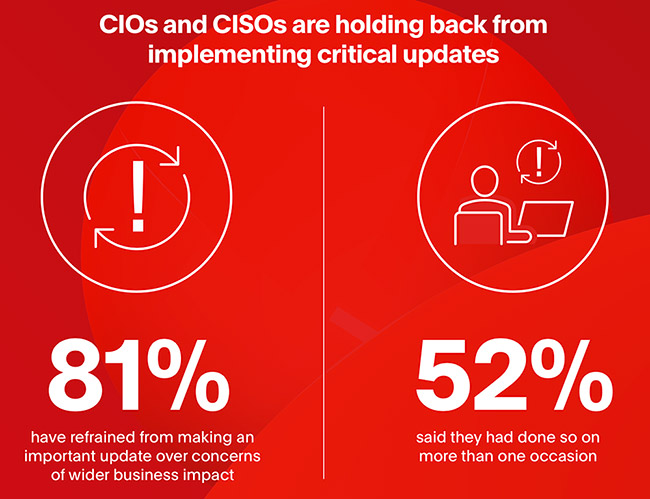 Over eight out of ten (81%) said that they have refrained from adopting an important security update or patch, due to concerns about the impact it might have on business operations. In fact, over half (52%) said they had done so on more than one occasion, according to the new research released by Tanium.

The Global Resilience Gap study of 500 CIOs and CISOs across the United States, United Kingdom, Germany, France and Japan, in companies of 1000+ employees explores the challenges and trade-offs that IT operations and security leaders face in protecting their business from a growing number of cyber threats and disruptions.

The study also explores the internal challenges that are holding back most technology leaders from achieving full visibility and control of their IT environments.

Lack of visibility and control across networks

The study discovered that a lack of visibility across endpoints – laptops, servers, virtual machines, containers, or cloud infrastructure – is preventing organizations from making confident decisions, operating efficiently, and remaining resilient against disruptions.

Almost a third (32%) of respondents said that departments and business leaders work in silos, leaving them with a lack of visibility and control over IT operations.

And this has directly affected the business, with the majority (80%) of CIOs and CISOs having found out that a critical update or patch they thought had been deployed had not actually updated all devices, leaving the business exposed as a result.

IT security and operational trade-offs

As well as visibility issues, the study revealed the IT security and operational trade-offs that CIOs and CISOs make due to wider business pressures.

Over 9 in 10 (94%) respondents said that they have to make compromises in how well they are able to protect their organizations from disruptions to technology, including cyber threats and outages.

When asked about the key reasons for making these compromises, a third of those surveyed (33%) cited pressure to keep the lights on, with almost a third (31%) suggesting that a focus on implementing new systems takes precedence over protecting existing business assets.

Otherwise, over a quarter (26%) cited that being hamstrung by legacy IT commitments restricted their security efforts, and 23% stressed that internal politics was the key driver.

A lack of understanding of the need for business and technology resilience among other leaders across an organization was identified as a key factor in pressuring CIOs and CISOs to make compromises in their efforts to maintain resilience against disruption.

Almost half (47%) of the CIOs and CISOs surveyed said that they face challenges because other business units do not grasp how important technology resilience is to the company.

While, 40% claimed issues arise as other business units prioritize their customer work over security protocols.

A quarter (25%) of respondents said that the company being unable to comply with current regulations was also a concern. 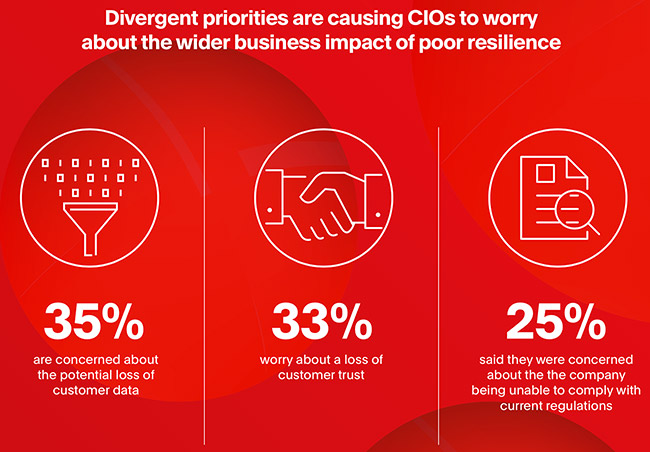 Ryan Kazanciyan, Chief Technology Officer at Tanium concludes: “A resilient organization can depend on its people, processes and technology to quickly adapt to cyberattacks, outages and other forms of disruption. However, our research shows that CIOs and CISOs are having to hold off on making crucial updates due to concerns about the impact it might have on business operations.

Given that global cyber-attacks such as WannaCry were catalyzed by poor security hygiene, organizations need to ensure that they can confidently effect change to protect critical assets, monitor impact, and recover from the unexpected.

As organizations look to build a strong security and compliance culture, it is essential that IT operations and security teams unite around a common set of actionable data for true visibility and control over all of their computing devices. This will enable them to prevent, adapt and rapidly respond in real-time to any technical disruption or cyber threat.”