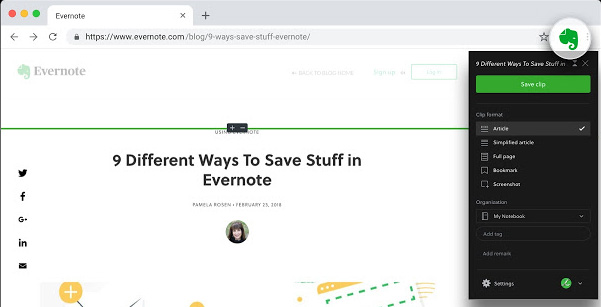 The vulnerability, a Universal XSS marked CVE-2019-12592, was discovered as part of Guardio’s ongoing security analysis efforts using a combination of internal technology and researchers. Guardio disclosed the vulnerabilities to Evernote during the last week of May, which prompted Evernote to address them and roll out a complete fix – within less than a week.

Due to Evernote’s widespread popularity, this issue had the potential of affecting its consumers and companies who use the extension – about 4,600,000 users at the time of discovery.

The logical coding error in the Web Clipper extension could have allowed an attacker to bypass the browser’s same origin policy, granting the attacker code execution privileges in Iframes beyond Evernote’s domain. As the browser’s domain-isolation mechanisms were broken, code could be executed that could allow an attacker to perform actions on behalf of the user as well as grant access to sensitive user information on affected third-party web pages and services, including authentication, financials, private conversations in social media, personal emails, and more.

According to its security page, Evernote “periodically assesses its infrastructure and applications for vulnerabilities and remediates those that could impact the security of customer data.”

As the trend to move to the cloud continues, the browser is becoming the users de-facto OS – replacing where users use their applications and access their data. While app authors strive to provide faster, smoother user experiences, extensions usually have permissions to access a trove of sensitive resources, inadvertently posing a much greater security risk than traditional websites.

“The vulnerability we discovered is a testament to the importance of scrutinizing browser extensions with extra care. People need to be aware that even the most trusted extensions can contain a pathway for attackers,” said Michael Vainshtein, CTO, Guardio. “All it takes is a single unsafe extension to compromise anything you do or store online. The ripple effect is immediate and intense.”