With the incidence of reported data breaches on the rise, more than half of all C-suite executives (C-Suites) (53%) and nearly three in 10 Small Business Owners (SBOs) (28%) who suffered a breach reveal that human error or accidental loss by an external vendor/source was the cause of the data breach, according to a Shred-it survey conducted by Ipsos. 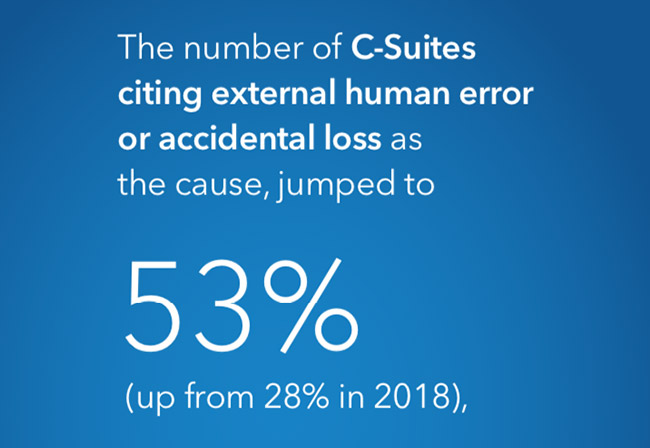 When assessing additional causes of data breaches, the report found that nearly half of all C-Suites (47%) and one in three SBOs (31%) say human error or accidental loss by an employee/insider was the cause.

What’s more, one in five C-Suites (21%) and nearly one in three SBOs (28%) admit deliberate theft or sabotage by an employee/insider was the cause of the data breach, compared to two in five C-Suites (43%) and one in three SBOs (31%) who say deliberate theft or sabotage by an external vendor/source caused their organization to suffer a data breach.

“New to this year however, is that the report revealed how deliberate sabotage by both employees and external partners are very real risks organizations face today. The consequences of a data breach are extensive and are not limited to legal, financial and reputational damage. As the report showed, data breaches can affect employee retention too.”

While the result of a data breach can have a variety of consequences on U.S. businesses, one of the most important factors is that a breach has an immediate effect on employee trust in an organization. In fact, one-third (33%) of the U.S. workforce say they would likely look for a new job if their employer suffered a breach of customer (31%) or employee data (35%).

What’s more, while nearly half of all consumers (47%) would wait to see how a business reacts to a data breach they’ve suffered before making up their mind about what to do, nearly one in four consumers (23%) would stop doing business with the company and nearly one-third (31%) would tell others about the breach, the Shred-it’s Ninth Annual Data Protection Report reveals.

Worries of a data breach grow