Nearly 80% of US citizens are increasingly worried about ransomware attacks on cities – yet more than half are still hesitant to have city governments put forth the funds to fight off hackers or implement cybersecurity defenses to help protect against attacks in the first place, according to a survey conducted by Morning Consult on behalf of IBM. 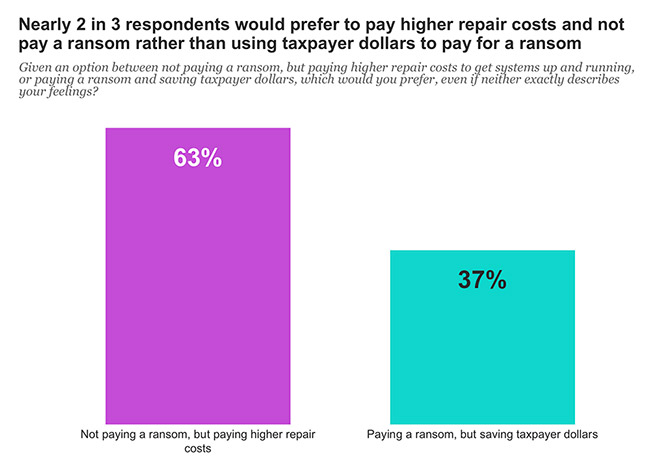 The study findings explore the extent to which U.S. citizens understand the severity of ransomware attacks, what they’re willing to contribute from their tax dollars, how they feel government leaders are handling the issue, and how they prioritize the services that are being targeted during attacks.

The results illustrate a divide between surveyed taxpayer’s expectations and public official’s resources, creating a challenge for local and state governments combating and managing the threat of ransomware.

The study was compiled based on the responses of 2,200 US citizens spanning various city sizes, ages, incomes, political views, and more. Key findings from the study include:

“The use of ransomware to hold cities hostage for ransom payments continues to grow, and as those impacted pay off the attackers’ ransom, the more the price continues to increase,” said Wendi Whitmore, Vice President X-Force Threat Intelligence, IBM Security.

“One common misconception is that paying the ransom immediately solves the problem, however doing so doesn’t always guarantee swift recovery of infected devices. It requires significant time and investment to decrypt devices, and there’s always the chance that paying criminals still won’t result in unlocked files at all.”

What government services and systems do taxpayers prioritize?

Even those who were willing to pay to restore critical emergency services were, in many cases, often only willing to do so if the cost ran below $50,000. Nearly 40% of respondents specifically noted they wouldn’t pay anything to assist K-12 public schools or police departments.

Role of government in responding to ransomware

According to a 2018 survey of state Chief Information Security Officers, “nearly half of all U.S. states do not have a cybersecurity budget line item,” and “more than a third have seen no growth or a reduction in those budgets.

State enterprise IT budgets allocated to enterprise cybersecurity is 1–2 percent, and annual budget increases have not kept pace with the needs of today’s security landscape and tomorrow’s evolving challenges.”

Additionally, citizens are much more willing to see the federal government pay to implement better cybersecurity, rather than pulling from their own local tax dollars – nearly 90% of taxpayers surveyed are in favor of increasing federal funding for local governments to improve cybersecurity.

And for those who have already been hit by these attacks, more than three-quarters of responding citizens believe the federal government should be reimbursing those cities who continue to be crippled by the aftermath of their attacks. 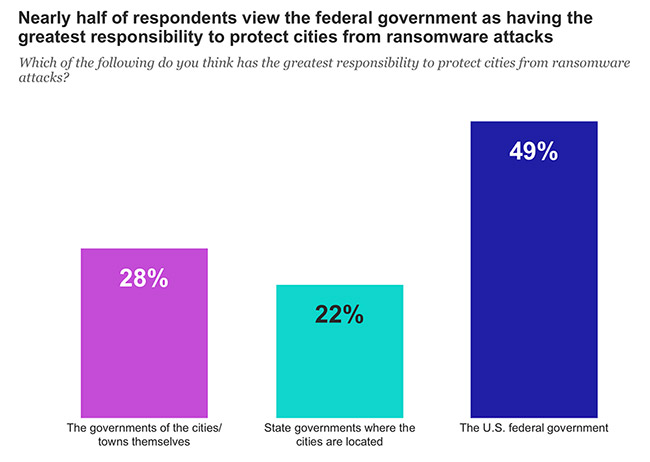 Preparing for and managing ransomware attacks

IBM X-Force Incident Response and Intelligence Services (IRIS) offers the following recommendations for organizations, cities, government entities, and beyond on how they can prepare for ransomware attacks: