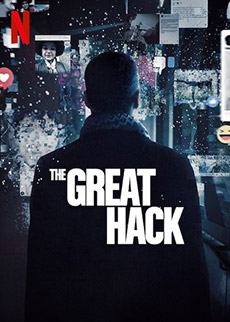 Data is the most valuable asset/resource on Earth. Still, we have little or no control over who is exploiting ours without our consent.

That is what the authors, Jehane Noujaim and Karim Amer, want to make us realize in their documentary film The Great Hack, released by Netflix on July 24, 2019.

Jehane Noujaim, American documentary film director, and Karim Amer, Egyptian-American film producer and director, already worked together on The Square (2013), but it was working on The Great Hack, both as directors, that earned them an Academy Award nomination.

The documentary covers the Facebook-Cambridge Analytica data scandal, which revealed how the UK-based political consulting firm used Facebook to influence voters during Ted Cruz’s and Donald Trump’s presidential campaigns and the Brexit campaign.

We get to know about the issue through the experiences of the people involved. The documentary begins with David Carroll, media professor at Parsons, also the narrator, who tried to get hold of his personal information used in the campaign and later sued Cambridge Analytica.

Then there are Christopher Wylie, programmer and data analyst, and Brittany Keiser, former business developer director for Cambridge Analytica, both presenting themselves as whistleblowers. The latter shows extreme remorse, even becomes an “own your data” advocate.

Does this really absolve her of all responsibility? Because, let’s be honest, it was all part of her job. It never occurred to her during the campaigns that what they were doing was wrong?

Carole Cadwalladr, a British author and investigative journalist, also gives her opinion and talks about her experience. She was the one to expose the data scandal, with Christopher Wylie as her main source of information.

The film gives insights on how data is used to form a general opinion and specifically influence the so-called “persuadables” (the ones who haven’t yet decided who to vote for) during a political campaign.

Even if you are sure nothing can influence you or make you change your mind, doubts arise and leave you wondering if your opinion is truly yours.

The documentary is nicely structured and captivating, and should be easily comprehensible to a wide audience. It doesn’t present you with a solution though, it just gives you an insight into how the world today is functioning.

If you thought that liking and sharing posts on Facebook was just an innocent pastime and that no-one would ever be interested in the information you provide on social media – think again.

There is no consolation, exploiting data is a reality, and the film leaves you with a bitter taste. Even if Cambridge Analytica closed operations, there are and there will be other firms offering the same service.