Fraud rates have been skyrocketing, with 90 voice channel attacks occurring every minute in the U.S., Pindrop reveals. 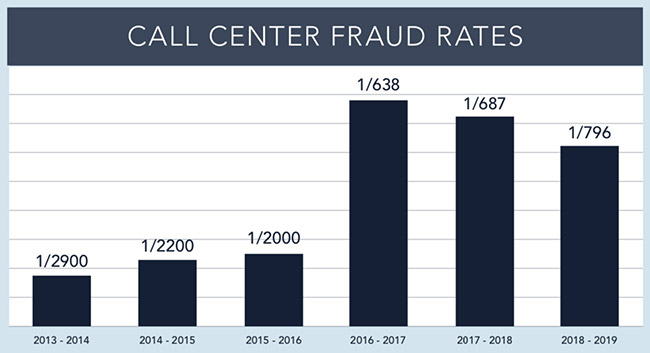 “Cybersecurity crimes are increasing each and every day as fraudsters and the technologies they use become more sophisticated,” said Vijay Balasubramanian, CEO of Pindrop.

“As we examine the biggest threats and trends impacting the insurance, financial, and retail sectors and prepare to battle emerging technologies, we urge enterprises to assess their fraud and authentication strategies to ensure they are prepared to safeguard their customers’ assets.”

Deepfake made headlines in 2019 as fraudsters found ways to improve this technology for both entertaining and malicious purposes. The impact ranged from involuntary pornography featuring Scarlett Johansson to harmless content such as Steve Buscemi’s face swapped on to Jennifer Lawrence’s body.

Deepfakes have entered the political arena, with both federal and state government officials passing legislation to combat this technology.

In the near future, we will see fraudsters call into contact centers utilizing synthetic voices to test companies on whether or not they have the technology in place to detect them, particularly targeting the banking sector.

These attacks are dependent on deep learning and Generative Adversarial Networks (GANs), a deep neural net architecture comprised of two neural nets, pitting one against the other. GANs can learn to mimic any distribution of data—augmenting images with animation, or video with sound.

These technologies use machine learning to generate audio from scratch, analyzing waveforms from a database of human speech and re-creating them at a rate of 24,000 samples per second. The end result includes voices with subletities such as lip smacks and accents, making it easier for bad actors to commit breaches.

The birth of the conversational economy

In the near future, phones, apps, smart devices, cars, banks, and offices will identify consumers by their voice, regardless of the platform or brand. This is referred to as the conversational economy.

With fraud rates increasing and $14 billion lost annually to fraud, companies will need to overcome challenges with voice such as securing it, allaying privacy concerns, and equipping call centers and customer service representatives with the right solutions to detect and prevent fraud.

The rise of the conversational economy and the demand for a more personalized customer experience means authentication must be prioritized as a key technology for companies.

Traditional knowledge-based authentication questions, such as “what’s your first car make,” are no longer an effective form of authenticating customers. Major data breaches have leaked nearly everyone’s personal data, including the responses to these questions.

Enterprises must implement an omnichannel authentication experience where customers authenticate once and gain access to their account across several devices, offering a truly frictionless experience.