Another critical finding was that “hacking” was responsible for the highest percentage of data breaches (39 percent) and the highest number of non-sensitive records exposed (81 percent).

“Unauthorized access” was the second most common breach method identified with nearly the same percentage as hacking at 36.5 percent. Unauthorized access continued to be a catch-all category with little transparency on the actual method of intrusion throughout 2019. 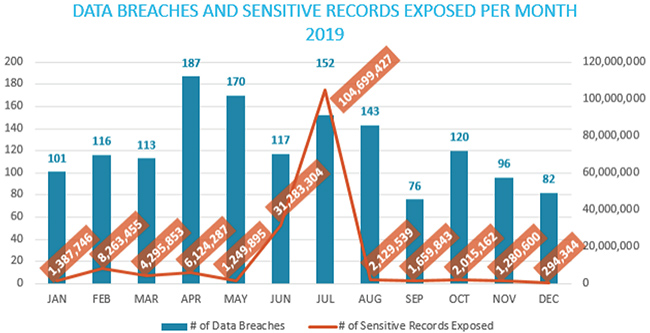 “The overall increase in breaches is certainly concerning. However, the extraordinary drop in the number of records exposed and the incredible feat of cutting the sensitive PII exposed by two thirds, indicates that we may be moving in a good direction with regards to the extent of the damage associated with breaches. Businesses and consumers need to continue to be vigilant in protecting data and systems, ensuring they have current protections in place, because even non-sensitive data exposure can lead to more serious issues,” said Matt Cullina, Board Chair of the ITRC.