Cybersecurity and, to a lesser but growing extent, compliance are the most pressing priorities for MSPs and their customers this year, according to a Kaseya survey of 1,300 owners and technicians of MSP firms in more than 50 countries. 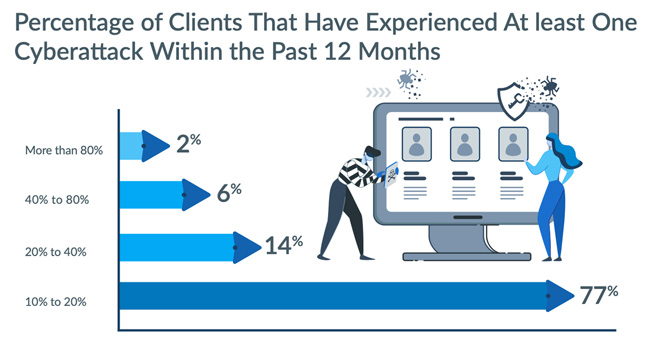 “Respondents to this year’s survey overwhelmingly agreed that their clients need more cybersecurity support from them. This is especially true in today’s uncertain environment,” said Jim Lippie, senior vice president and GM of partner development at Kaseya.

“As more small and midsize businesses look to maintain vital security operations and decrease IT costs internally ahead of an economic downturn, they will lean on the expertise and services provided by MSPs to keep their companies operating.”

While responses to the 2020 survey were collected in December 2019 prior to the coronavirus crisis, the pandemic has only increased the focus on a need for expanded IT security measures.

Companies of all sizes have recently seen an increase in cyberattacks with an influx of personal devices connecting to the corporate network and as malicious actors hope to take advantage of the uncertain times.

“More than half, or 60 percent, of our respondents said their clients experienced downtime from an outage in the past year,” Lippie continued.

“In our current, unprecedented climate, an outage can mean the end for a small business. So for MSPs, who are the IT backbone of these small businesses, there’s a significant opportunity to diversify their clients’ cybersecurity solutions and strategy in order to respond agilely to any threat that comes their way and maintain their livelihood.”

Both MSPs and their customers have faced increased security threats year over year. Because MSPs have access to their clients’ IT environments through remote monitoring and management (RMM) tools, they are an ideal target for malicious actors who see opportunity in the ability to extend the impact of their attacks. In fact, a little more than 1 in 3 respondents (37 percent) said they felt their MSP business was more prone to cybercrime now than it was in 2019.

On top of the concern for their own organization’s security, MSPs must contend with increased cyber risks to their clients. Almost all respondents (95 percent) have had either some or most of their clients turn to them for counsel on cybersecurity plans and best practices.

Additionally, nearly three in four respondents said that 10 to 20 percent of their clients experienced at least one cyberattack in the past year.

Companies need more cybersecurity support from their MSP partners. Among a ranking of several top IT needs, such as “supporting mobile devices,” “legacy system replacement” and “public cloud adoption, migration and support,” 29 percent of respondents listed “meeting security risks” as their clients’ top IT need.

“Cybersecurity services,” like antivirus, anti malware and ransomware protection, followed closely at 14 percent. Together, these two options make up more than 40 percent of responses to the question. With ransomware and malware attacks making headlines every day, MSPs have an opportunity to protect existing and future customers by providing multi-layered security and backup services.

The need for compliance services is growing

With the increasing number of regulations, including the CCPA and the New York Stop Hacks and Improve Electronic Data (SHIELD) Security Act, data privacy has become a necessity for small and large organizations alike. In fact, two-thirds of respondents reported that their clients struggle to meet compliance requirements, and nearly one-third reported an increased need for compliance services in the past two years.

As our dependence on software and other technologies grow, regulators will continue to enact data privacy laws. This presents an opportunity for MSPs to develop and leverage a niche expertise in this space to help clients maintain compliance with an increasingly complex set of regulations.

For more than half of respondents (61 percent), RMM remains the most important application, followed by PSA (21 percent) and IT documentation (11 percent).

In the past decade, MSPs have evolved greatly from simply providing break-fix services to implementing full-fledged suites of solutions. Driving this evolution is the ability of MSPs to agilely respond to emerging needs in the market.

Nearly 90 percent of respondents consider the expansion of their service offerings important, which makes sense: The most successful, high-growth MSPs — those with an average monthly recurring revenue growth greater than 20 percent — have added about four to five new services to their offerings in the past two years.

Cloud support decreases but remains an opportunity for MSP growth

Despite this, there still remains an opportunity for MSPs to grow their cloud management offerings, as nearly a quarter (21 percent) of successful, high-growth MSPs manage their clients’ public cloud environments.