31% of Americans are concerned about their data security while working from home during the global health crisis, according to a Unisys Security survey. 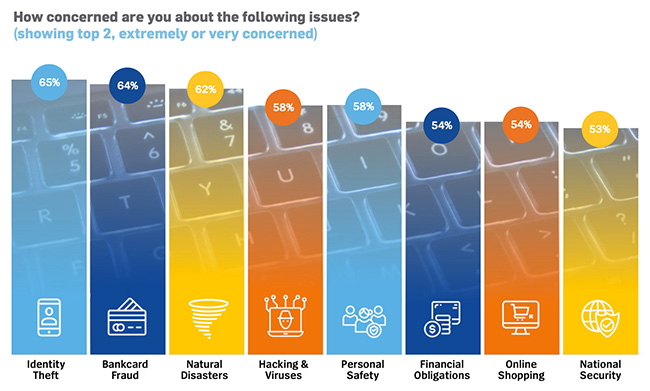 The survey found that overall concerns around internet security (including computer viruses and hacking) have plunged in the last year, falling 13 points from 2019 and ranking the lowest among the four primary areas of security surveyed for the first time since 2010.

The findings come despite a significant rise in cyberattacks during the pandemic: the FTC reports more than 52,000 cases of reported fraud related to COVID-19.

According to the FBI, online crimes reported to the IC3 have increased by 400% as a result of the pandemic, with as many as 4,000 incidents per day.

The survey also found that most Americans (70%) are not concerned about the risk of being scammed during or about the health crisis. This lack of concern was even more stark compared to the rest of the world, as Americans were 24% less likely to report concern about a data breach during the pandemic as compared to the global average.

Not surprisingly, concerns around personal safety and natural disasters and epidemics increased by 17% and 6% from 2019, respectively; however, that was met with a stark drop in concerns over national security, which saw a 19% decrease from 2019.

“It’s not surprising to see people’s level of concern for their personal safety jump in light of the global health crisis. However, the fact that it is not only matched by, but exceeded by, a drop in concerns around hacking, scamming or online fraud reflects a false sense of consumer security,” said Unisys CISO Mat Newfield.

“And hackers are relying on tricks like ‘password spraying,’ which involves an attacker repeatedly using common passwords on many accounts to gain access, putting our most critical infrastructures at risk potentially from the click of a single working-from-home employee.

“This underscores the need for businesses to ensure they are placing a clear and concerted emphasis on proper training for their employees working from home and adopting a zero trust security architecture that leverages best practices like encryption and microsegmentation.”

More than 15,000 consumers in 15 countries were surveyed, including more than 1,000 in the U.S., in March and April 2020. On a scale of zero to 300, with 300 representing the highest level of concern, the U.S. index is now at 159, a serious level of concern and the second-highest among the nine developed countries surveyed.

The level of concern for U.S. respondents with lower incomes was 14 points higher than higher-income respondents.

“The survey shines a spotlight on the significant ways that COVID-19 has impacted everyone, especially women, young adults and those with lower incomes,” said Unisys CMO Ann Sung Ruckstuhl.

“For many women, particularly those with children at home, the pandemic has only magnified the challenges they have long been facing as they juggle career and family.”