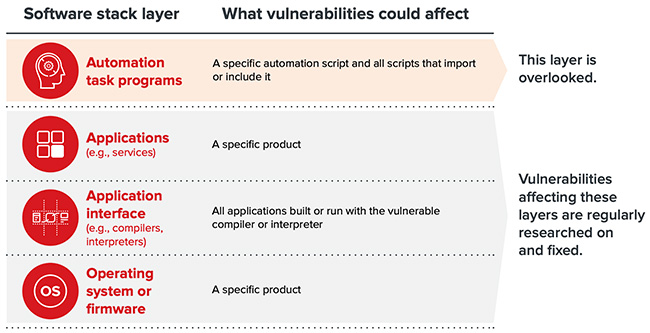 According to the research, the industrial automation world may be unprepared to detect and prevent the exploitation of the issues found. Therefore it is imperative that the industry start embracing and establishing network-security best practices and secure-coding practices, which have been updated with industry leaders as a result of this research.

“Once OT systems are network-connected, applying patches and updates is nearly impossible, which makes secure development upfront absolutely critical,” said Bill Malik, VP of infrastructure strategies for Trend Micro. “Today, the software backbone of industrial automation depends on legacy technologies that too often contain latent vulnerabilities, like Urgent/11 and Ripple20, or varieties of Y2K-like architectural defects. We don’t want to simply point out these challenges, but once again take the lead in securing Industry 4.0 by offering concrete guidance for design, coding, verification, and on-going maintenance, along with tools to scan and block malicious and vulnerable code.”

Legacy proprietary programming languages such as RAPID, KRL, AS, PDL2, and PacScript were designed without an active attacker model in mind. Developed decades ago, they are now essential to critical automation tasks on the factory floor, but can’t themselves be fixed easily.

Not only are vulnerabilities a concern in the automation programs written using these proprietary languages, but researchers demonstrate how a new kind of self-propagating malware could be created using one of the legacy programming languages as an example.

Trend Micro Research has worked closely with The Robotic Operating System Industrial Consortium to establish recommendations to reduce the exploitability of the identified issues.

“Most industrial robots are designed for isolated production networks and use legacy programming languages,” said Christoph Hellmann, Program Manager, ROS-Industrial Consortium Europe. “They can be vulnerable to attacks if connected to, for example, an organisation’s IT-network. Therefore, ROS-Industrial and Trend Micro have collaborated to develop guidelines for correct and secure network set-up for controlling industrial robots using ROS.” 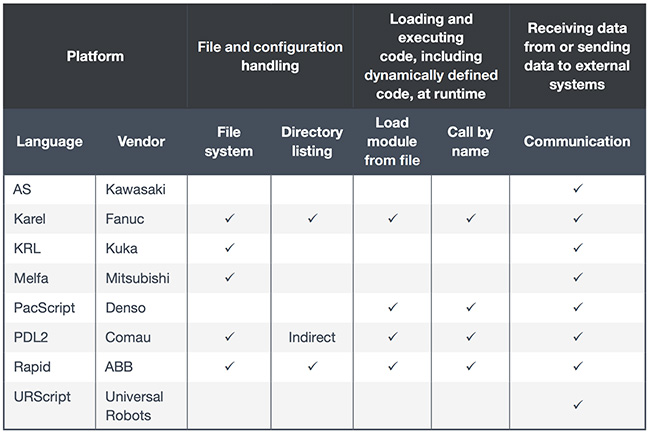 As these new guidelines demonstrate, the task programs that rely on these languages and govern the automatic movements of industrial robots can be written in a more secure manner to mitigate Industry 4.0 risk. The essential checklist for writing secure task programs includes the following:

In addition, researchers have also developed a patent-pending tool to detect vulnerable or malicious code in task programs, thus preventing damage at runtime.

As a result of this research, security-sensitive features were identified in the eight most popular industrial robotic programming platforms, and a total of 40 instances of vulnerable open source code have been found.

One vendor has removed the automation program affected by a vulnerability from its application store for industrial software, and two more have been acknowledged by the maintainer, leading to fruitful discussion. Details of the vulnerability disclosures have also been shared by ICS-CERT in an alert to their community.