Among the rights bestowed upon EU citizens by the General Data Protection Regulation (GDPR) is the right to access their personal data stored by companies (i.e., data controllers) and information about how this personal data is being processed. A group of academics from three German universities has decided to investigate whether and how mobile app vendors respond to subject access requests, and the results of their four-year undercover field study are dispiriting.

The results of the study

“In three iterations between 2015 and 2019, we sent subject access requests to vendors of 225 mobile apps popular in Germany. Throughout the iterations, 19 to 26 % of the vendors were unreachable or did not reply at all. Our subject access requests were fulfilled in 15 to 53 % of the cases, with an unexpected decline between the GDPR enforcement date and the end of our study,” they shared.

“The remaining responses exhibit a long list of shortcomings, including severe violations of information security and data protection principles. Some responses even contained deceptive and misleading statements (7 to 13 %). Further, 9 % of the apps were discontinued and 27 % of the user accounts vanished during our study, mostly without proper notification about the consequences for our personal data.” 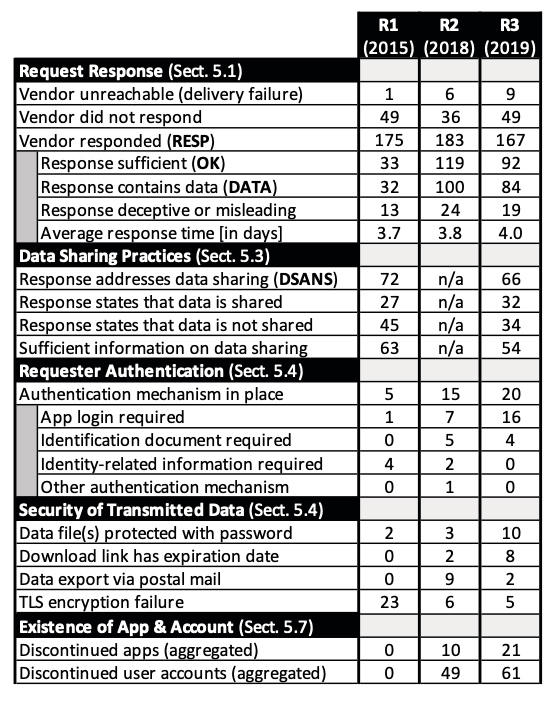 The researchers – Jacob Leon Kröger from TU Berlin (Weizenbaum Institute), Jens Lindemann from the University of Hamburg, and Prof. Dr. Dominik Herrmann from the University of Bamberg – made sure to test a representative sample of iOS and Android apps: popular and less popular, from a variety of app categories, and from vendors based in Germany, the EU, and outside of the EU.

They disguised themselves as an ordinary German user, created accounts needed for the apps to work, interacted with each app for about ten minutes, and asked app providers for information about their stored personal data (before and after GDPR enforcement).

They also used different a request text for each round of inquiries. The first one was more informal, while the last two were more elaborate and included references to relevant data protection laws and a warning that the responsible data protection authorities would be notified in the case of no response.

“While we cannot precisely determine their individual influence, it can be assumed that both the introduction of the GDPR as well as the more formal and threatening tone of our inquiry in [the latter two inquiries] had an impact on the vendors’ behavior,” they noted.

Smartphones are ubiquitous and most users use a variety of mobile apps, which usually collect personal user data and share it with third parties.

In theory, the GDPR should force mobile app vendors to provide information about this data and how it’s used to users. In practice, though, many app vendors are obviously hoping that users won’t care enough about it and won’t make a stink when they don’t receive a satisfactory reply, and that GDPR regulators won’t have the resources to enforce the regulation.

“We (…) suspected that some vendors merely pretended to be poorly reachable when they received subject access requests – while others actually had insufficient resources to process incoming emails,” the researchers noted.

“To confirm this hypothesis, we tested how the vendors that failed to respond to our requests reacted to non-privacy related inquiries. Using another (different) fake identity, we emailed the vendors who had not replied [to the first inquiry] and [to the third inquiry], expressing interest in promoting their apps on a personal blog or YouTube channel. Out of the group of initial non-responders, 31 % [first inquiry] and 22 % [third inquiry] replied to these dummy requests, many of them within a few hours, proving that their email inbox was in fact being monitored.”

The researchers believe the situation for users can be improved by authorities doing random compliance checks and offering better support for data controllers through industry-specific guidelines and best practices.

“In particular, there should be mandatory standard interfaces for providing data exports and other privacy-related information to data subjects, obviating the need for the manual processing of GDPR requests,” they concluded.