On average, 50% of users at enterprises running Microsoft 365 are not managed by default security policies within the platform, according to CoreView. 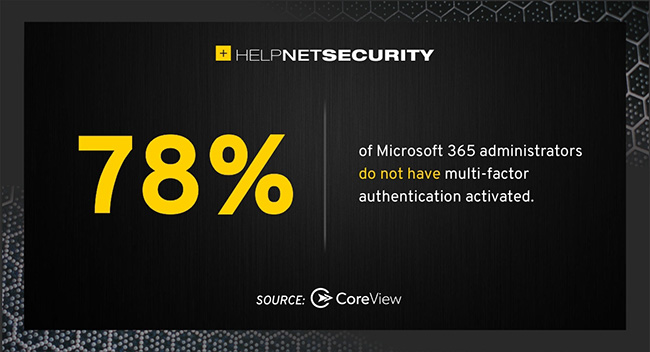 The survey research shows that approximately 78% of Microsoft 365 administrators do not have multi-factor authentication (MFA) activated.

According to SANS, 99% of data breaches can be prevented using MFA. This is a huge security risk, particularly during a time when so many employees are working remotely.

Investing in productivity and operation apps without considering security implications

The data shows that US enterprises (on average, not collectively) utilize more than 1,100 different productivity and operations applications, which indicates a strong dedication to the growing needs of business across departments, locations, and time zones.

Shadow IT is ripe for attack and according to a Gartner prediction, this year, one-third of all successful attacks on enterprises will be against shadow IT resources.

Many businesses underestimate the security and governance responsibilities they take on when migrating to Microsoft 365. IT leaders often assume that Microsoft 365 has built-in, fool-proof frameworks for critical IT-related decisions, such as data governance, securing business applications, and prioritizing IT investments and principles.

The research disprove this by revealing that many organizations struggle with fundamental governance and security tasks for their Microsoft 365 environment. Today’s remote and hybrid working environment requires IT leaders to be proactive in prioritizing security and data governance in Microsoft 365.