Cohesity announced the results of a survey of 500 IT decision makers in the United States that highlights critical IT and data management challenges midsize and enterprise organizations are facing as companies prepare for 2021. 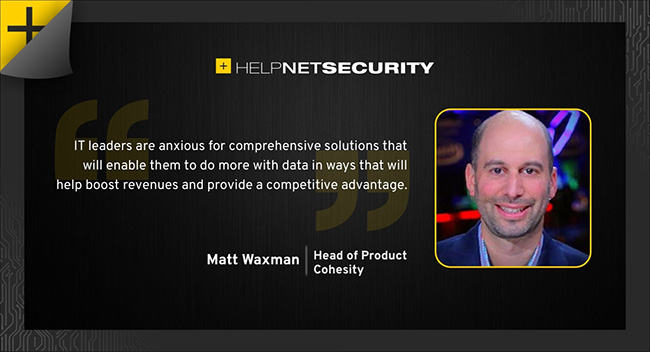 The survey included 250 respondents from midsize companies ($100M-$1B in revenue) and 250 from enterprise organizations ($1B+ in revenue).

Some of these challenges came to light as companies answered questions about their appetite for Data Management as a Service (DMaaS). With a DMaaS solution, organizations do not have to manage data infrastructure – it is managed for them.

DMaaS provides organizations with easy access to backup and recovery, disaster recovery, archiving, file and object services, dev/test provisioning, data governance, and security – all through one vendor in a Software as a Service (SaaS) model.

Even worse, 18 percent of respondents from midsize companies claim to have lost 50-75 percent of deals to larger enterprises for the same reason.

Technology is needed that makes it easier to derive value from data while also reducing stress levels and employee turnover: When respondents were asked about the benefits of deploying a DMaaS solution versus spending so much time managing data infrastructure, 61 percent cited an ability to focus more on deriving value from data which could help their organization’s bottom line, 52 percent cited reduced stress levels for IT teams, and 47 percent are hopeful this type of solution could also reduce employee turnover within the IT team.

“As 2020 comes to a close, it’s clear that IT teams are expected to face significant challenges in 2021,” said Matt Waxman, VP, product management, Cohesity.

“Research shows IT leaders are anxious for comprehensive solutions that will enable them to do more with data in ways that will help boost revenues and provide a competitive advantage at a time when they are also facing budget cuts, burnout, and turnover.”

The growing appetite for technology that simplifies IT and data management

As businesses look to simplify IT operations, be more cost efficient, and do more with data, respondents are very optimistic about the benefits of DMaaS, which include:

“The data also pinpoints another important IT trend in 2021: choice is critical,” said Waxman. “IT leaders want to manage data as they see fit.” With respect to choice, respondents stated: