In a recent report, Trend Micro announced it detected 119,000 cyber threats per minute in 2020 as home workers and infrastructure came under new pressure from attacks. 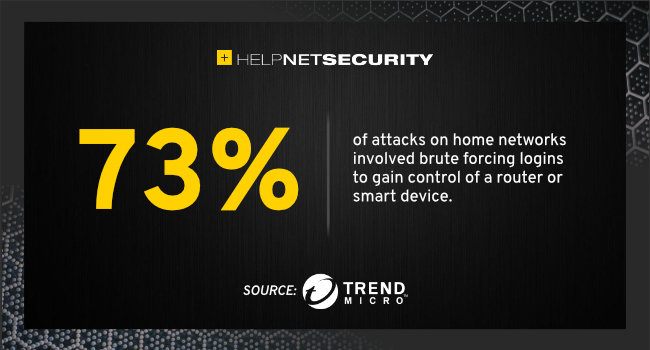 The report also shows that home networks were a major draw last year for cybercriminals looking to pivot to corporate systems, or compromise and conscript IoT devices into botnets.

Attacks on homes surged 210% to reach nearly 2.9 billion—amounting to 15.5% of all homes. 73% of attacks on home networks involved brute forcing logins to gain control of a router or smart device.

“In 2020, businesses faced unprecedented threat volumes hitting their extended infrastructure, including the networks of home workers. Familiar tactics such as phishing, brute forcing and vulnerability exploitation are still favored as the primary means of compromise, which should help when developing defenses,” said Jon Clay, director of global threat communications for Trend Micro.

“Global organizations have now had time to understand the operational and cyber risk impact of the pandemic. The new year is a chance to adjust and improve with comprehensive cloud-based security to protect distributed staff and systems.”