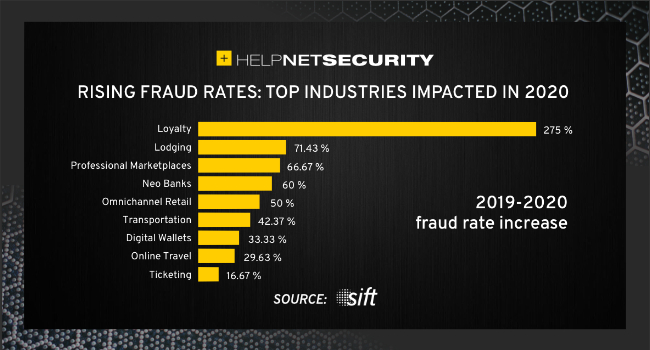 Also, several business categories were hit by both major increases in attempted fraud rates and increases in the value of those fraudulent purchases, with lodging merchants, omnichannel retailers, digital wallets, and professional marketplace companies becoming targets for online theft amid the COVID-19 pandemic.

The group employed automated scripts to launch thousands of attacks on these sites through guest checkout options, which allow buyers to forgo the account creation process and only require a user’s email address before the user enters their payment information.

The group’s innovative tactics demonstrate the ever-evolving nature of the Fraud Economy – a network of active cybercriminals with access to everything they need to exploit online businesses.

Fighting back against the fraud economy

“Amid the COVID-19 pandemic, we saw a decade’s worth of e-commerce growth condensed into a single year,” said Marc Olesen, President and CEO of Sift.

“At the same time, cybercriminals were lying in wait, ready to take advantage of millions of vulnerable targets and enacting new methods to steal from them. As fraud fighters seek to stay ahead of the fraud economy, they must adopt a digital trust & safety strategy, which ensures they can both protect against abuse while reducing friction for legitimate purchases.”