A large-scale scam campaign targeting Facebook Messenger users all over the world has been detected by Group-IB. 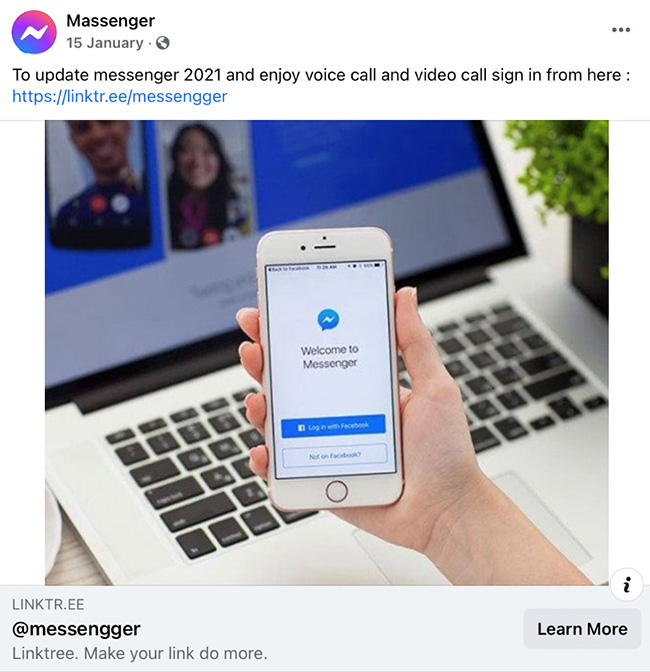 Analysts have discovered nearly 1,000 fake Facebook profiles employed in the scheme. Upon the discovery of this type of fraud, Group-IB informed the social network, which has nothing to do with the fake posts, of the ongoing campaign.

It is noteworthy that this scam first came into the spotlight in the summer of 2020, with analysts based in different regions — Asia and Europe — having detected traces of the same fraudulent campaign. Since then it has been growing progressively in scope.

To facilitate the moderation process in Facebook and bypass its scam filters, scammers used shortened links created with the help of such services as linktr.ee, bit.ly, cutt.us, cutt.ly, and rb.gy. After clicking on the link that is supposed to lead to the download of the app’s updated version, the user finds themselves on a fake Facebook Messenger website with a login form, where they’re asked to enter their credentials. Scammers used such platforms as blogspot.com, sites.google.com, github.io, and godaddysites.com to register fake Facebook Messenger login pages.

In order to excite users and make them follow the link, scammers endowed the app with some non-existent features like the possibility to find out who visited one’s profile and see the messages that were deleted or even offered to shift to Gold Messenger.

Scammers even used blackmailing to force users into downloading the app and pressured the latter with threats that if they didn’t sign up on the fake page, their account would be banned forever.

Analysts have found scam ads targeted at users in at least 84 countries worldwide. In Europe specifically, nearly 20 countries, including Germany, France, Italy, Spain, and the United Kingdom, were affected. Users who fell victim to this scheme risk leaking their personal data and have their account hijacked. Scammers, in turn, are likely to use the compromised account to either blackmail the victim, pushing them to pay a ransom to have access to their account restored, or further scale up the scheme using the Facebook profile to distribute scam ads.

“Living in the era of instant-everything, clicking on an attractive ad, proposal, headline became a natural human reflex. This didn’t come unnoticed by fraudsters who have been relentlessly feeding on users’ carelessness. It is up to brands to set things straight in this endless stand-off by ensuring that their name isn’t used to trick unsuspecting customers into a scam, with digital risk protection services serving as a silver bullet in this case.”

What should users do?

Users are called to stay vigilant and follow some basic cyber hygiene rules that will help avoid getting into cybercriminals’ trap. One should always be cautious while following shortened links and raise a red flag if it leads to a poll or one-page blog.

Never enter any personal data on websites to which you got from third-party resources even if they have logos of well-known brands. Enter your login credentials only on social network/service official website or official app.

It is also worth paying attention to the domain of the page you visit — fraudsters often register domain names misspelling brand names, as it was the case with Facebook Messenger.