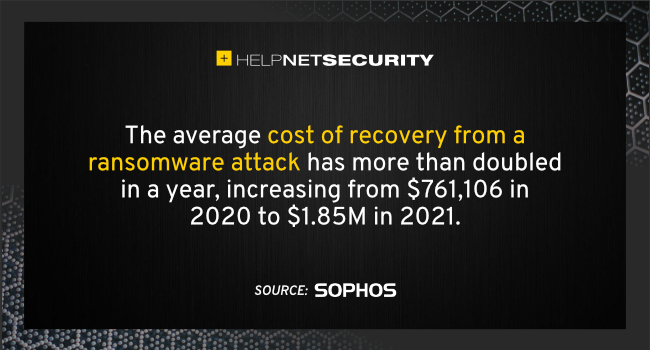 The global findings also show that only 8% of organizations manage to get back all of their data after paying a ransom, with 29% getting back no more than half of their data.

The survey polled 5,400 IT decision makers in mid-sized organizations in 30 countries across Europe, the Americas, Asia-Pacific and Central Asia, the Middle East, and Africa.

While the number of organizations that experienced a ransomware attack fell from 51% of respondents surveyed in 2020 to 37% in 2021, and fewer organizations suffered data encryption as the result of a significant attack (54% in 2021 compared to 73% in 2020), the new survey results reveal worrying upward trends, particularly in terms of the impact of a ransomware attack.

“The apparent decline in the number of organizations being hit by ransomware is good news, but it is tempered by the fact that this is likely to reflect, at least in part, changes in attacker behaviors,” said Chester Wisniewski, principal research scientist, Sophos.

“We’ve seen attackers move from larger scale, generic, automated attacks to more targeted attacks that include human hands-on-keyboard hacking. While the overall number of attacks is lower as a result, our experience shows that the potential for damage from these more advanced and complex targeted attacks is much higher. Such attacks are also harder to recover from, and we see this reflected in the survey in the doubling of overall remediation costs.”

“The findings confirm the brutal truth that when it comes to ransomware, it doesn’t pay to pay. Despite more organizations opting to pay a ransom, only a tiny minority of those who paid got back all their data,” said Wisniewski.

“This could be in part because using decryption keys to recover information can be complicated. What’s more, there’s no guarantee of success. For instance, as we saw recently with DearCry and Black Kingdom ransomware, attacks launched with low quality or hastily compiled code and techniques can make data recovery difficult, if not impossible.”

“Recovering from a ransomware attack can take years and is about so much more than just decrypting and restoring data,” said Wisniewski. “Whole systems need to be rebuilt from the ground up and then there is the operational downtime and customer impact to consider, and much more.

“Further, the definition of what constitutes a ‘ransomware’ attack is evolving. For a small, but significant minority of respondents, the attacks involved payment demands without data encryption. This could be because they had anti-ransomware technologies in place to block the encryption stage or because the attackers simply chose not to encrypt the data.

“It is likely that the attackers were demanding payment in return for not leaking stolen information online. A recent example of this approach involved the Clop ransomware gang and a known financially-motivated threat actor hitting around a dozen alleged victims with extortion-only attacks.

“In short, it is more important than ever to protect against adversaries at the door, before they get a chance to take hold and unfold their increasingly multi-faceted attacks. Fortunately, if organizations are attacked, they don’t have to face this challenge alone. Support is available 24/7 in the form of external security operations centers, human-led threat hunting and incident response services.” 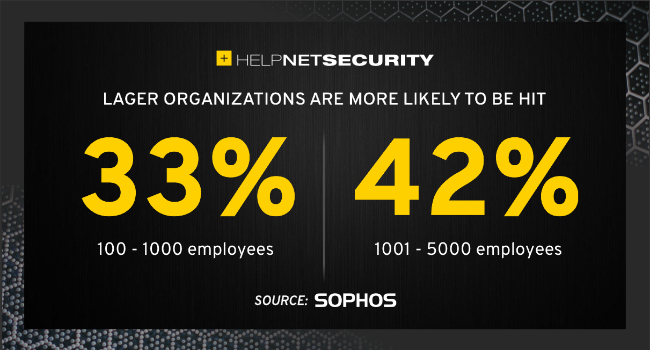 1. Assume you will be hit. Ransomware remains highly prevalent. No sector, country or organization size is immune from the risk. It’s better to be prepared, but not hit, rather than the other way round

2. Make backups and keep a copy offline. Backups are the main method organizations surveyed used to recover their data after an attack. Opt for the industry standard approach of 3:2:1 (three sets of backups, using two different media, one of which is kept offline)

3. Deploy layered protection. As more ransomware attacks also involve extortion, it is more important than ever to keep adversaries out in the first place. Use layered protection to block attackers at as many points as possible across an estate

4. Combine human experts and anti-ransomware technology. The key to stopping ransomware is defense in depth that combines dedicated anti-ransomware technology and human-led threat hunting. Technology provides the scale and automation an organization needs, while human experts are best able to detect the tell-tale tactics, techniques and procedures that indicate an attacker is attempting to get into the environment.

If you don’t have the skills in house, look at enlisting the support of a specialist cybersecurity company – Security Operation Centers (SOCs) are now realistic options for organizations of all sizes

5. Don’t pay the ransom. Easy to say, but far less easy to do when an organization has ground to a halt due to a ransomware attack. Independent of any ethical considerations, paying the ransom is an ineffective way to get data back. If you do decide to pay, bear in mind that the adversaries will restore, on average, only two-thirds of your files

6. Have a malware recovery plan. The best way to stop a cyberattack from turning into a full breach is to prepare in advance. Organizations that fall victim to an attack often realize they could have avoided significant financial loss and disruption, if they had an incident response plan in place