According to a new Sophos Home survey, forty-five percent of consumers say they’re more at risk of being hit by an attack now than they were before the pandemic, and 61% believe their household could be the target of an attack in the next year. Despite these concerns, the research findings show that security practices are falling short for many. 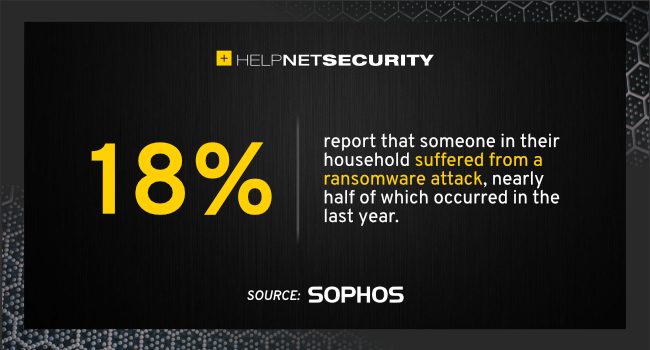 Many consumers are uninformed about online security

“Consumers are largely in the dark about cybersecurity,” said Chester Wisniewski, Sophos principal research scientist. “The findings show that many consumers are woefully uninformed about threats like ransomware, the likelihood and risk of these threats within their homes, and how to protect their families. The data also indicates that a number of consumers think they know more about cybersecurity than they actually do. All of this results in a false sense of security, and while it’s no excuse, it’s no doubt a reason why many consumers are failing to meet the security basics.”

Key findings from the U.S.

The survey polled 2,500 consumers across all regions of the U.S. Key findings include:

“Ransomware has become a household term and an understandable concern for everyday consumers – especially in the wake of the Colonial Pipeline and Kaseya attacks – but the fact of the matter is that ransomware attackers are looking to make a profit and they’re targeting businesses first and foremost,” said Wisniewski.

“Consumers aren’t off limits, however. While the risks to consumers are lower than those for well-funded organizations, they’re still very real risks and consumers need to take the necessary steps to protect themselves and their families. They simply can’t afford to overlook basic security practices like backing up data, protecting passwords, and updating and patching devices and applications.”

The new research findings shine light on several areas where consumer security practices are lacking, including: