15% of organizations are still using a combination of disk and tape backups, with 51% now using online or cloud backups, a research by Databarracks has revealed. 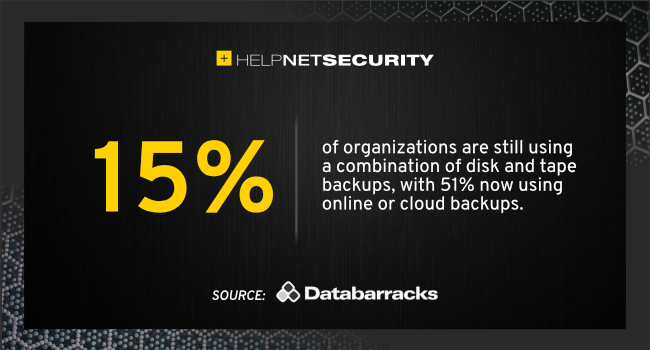 The annual report surveys over 400 IT decision-makers in the UK on cloud, backups, cybersecurity, IT resilience and remote working.

Peter Groucutt, Managing Director of Databarracks, said: “When we first started the Data Health Check in 2008, almost a fifth of organizations were still using tape as their only backup medium. By 2012, companies were moving to a combination of disk and tape or switching to online or cloud backup.

“Reports of tape’s death seem to have been greatly exaggerated. It still remains relatively popular. There are several reasons for this.

“Storage prices have reduced to make cloud backup viable for the majority of the market, but the lowest-cost method of storage is still tape. For organizations with vast data volumes – in industries such as life sciences or broadcast media – it meets that need.

“Tape is also difficult and slow to eliminate completely due to the years of historic backups you need to keep. Smaller businesses often make a clean break and switch to a new method however, larger firms and those with compliance requirements need to keep tape drives and tapes for several years. This puts some companies off moving due to the cost and manpower required to manage two backup methods while older retentions expire.

“The industry has been lamenting the decline of tapes for decades but even now, it seems they are here to stay.”

The benefits of improving the speed of backups

Groucutt says there are still major benefits to moving to faster and more efficient cloud backups.

He concluded: “Backup is one of the repetitive jobs that can really take time away from the IT team. Improving the speed of backups is not one of the most exciting IT projects, but it has a huge impact on the efficiency of IT operations. The lockdowns over the last 18 months have also driven more interest in completely automated backup solutions that don’t require manual interaction like with tape libraries.”