There has been a significant year-on-year leap in companies planning to move business-critical applications to the cloud, despite cybersecurity concerns, Equinix has found. 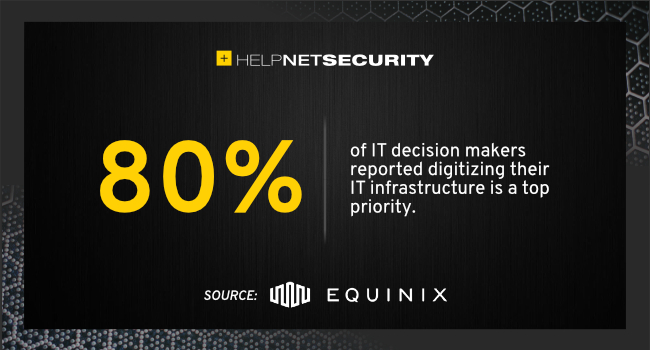 The need to remain competitive and cater to increased user demands has prompted a 15% jump to 37% of companies saying they plan to move business-critical applications to the cloud in 2020-21, compared to the previous year.

Despite security concerns, IT infrastructure is being moved to the cloud

As digital leaders build robust digital infrastructures to ensure future success, it is estimated that 47% of their IT infrastructure globally is now on the cloud, despite ongoing concerns over cloud security.

These findings come from a global study of the views of 2,600 IT decision-makers across the Americas, Asia-Pacific and EMEA.

Since the outbreak of the global COVID-19 pandemic, the risk of cyberattacks has greatly expanded at the digital edge. Cybercrime costs the world economy more than $1 trillion with the average cost to organizations estimated to be more than half a million dollars per incident.

Risk has been compounded by the large number of companies quickly shifting network capacity to cater to increasing volumes of remote worker data traffic. This has prompted a surge in cloud migration and broad implementation of cloud-based digital infrastructure as part of a hybrid infrastructure strategy.

Balancing cybersecurity concerns with cloud adoption in a digital-first world

Jennifer Cooke, Research Director, Edge Strategies, IDC, states: “Shifts in population centers, the increasing occurrence of cyberattacks, rapidly expanding data volumes and compliance needs, the creation of business ecosystems, and the transformation to digital business, have been driving the need for a new approach to digital infrastructure. These market forces are driving IT leaders to consider the best strategies and prioritize investments across the digital core, edge, and exchange of data.”

The GTTS found 70% of respondents believe migrating to the cloud is a top priority, with 80% focused on digitizing their IT infrastructure. This move is not being made lightly, with the threat of data leaks/cyberattacks as a result of increased cloud adoption being perceived as one of the biggest threats to organizations in all three regions: 52% AMER, 50% AP, 45% EMEA.

These concerns are not without merit. The Global Interconnection Index (GXI) Volume 4, a market study published by Equinix, revealed a growth in the number of user devices and cloud resources, meaning organizations have to be aware of distributed security risks such as DDoS attacks, which have grown over 270% year-over-year.

“Moving to the cloud is at the heart of this transformation. However, as our GTTS shows, many digital leaders remain nervous about this migration, with IT decision-makers highlighting fears around increased data leaks and security breaches.”