Vyopta released the second wave of results from a study on the real-life consequences of remote and hybrid work. Conducted by Wakefield Research, the study surveyed 200 U.S. executives at companies of 500 or more employees between July 30 and August 10, when COVID numbers began again to rise and return to office plans were yet again put on hold. 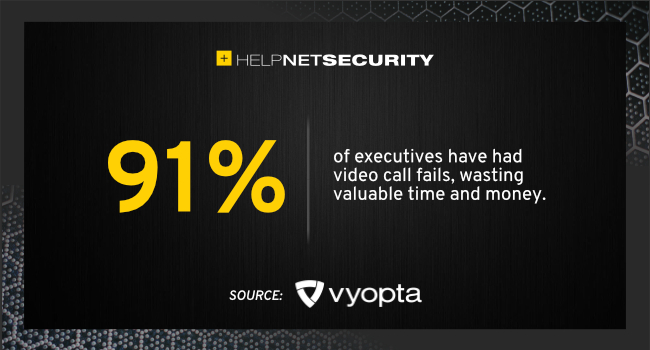 When asked if they have experienced issues due to virtual collaboration technology, 91% of executives reported that they had.

The biggest complaints included difficulty hearing or understanding a speaker due to connectivity issues (50%), callers joining late because they couldn’t get access (48%), and being unable to share content on screen due to freezing or other screen sharing issues (45%).

While most executives have worked from home for a long time now, daily virtual call headaches are still the norm — even at the highest levels.

75% of executives said that their company has had to reschedule a meeting when the technology failed — or perhaps they just needed to get their software in order. 44% delayed a meeting because they needed to install a program or update.

An overwhelming 86% of executives report having someone outside their organization ask to use their own virtual collaboration tools after experiencing problems with theirs (86%). And 26% say this happens all the time.

“I wish I could tell you that this was surprising but it lines up with what the organizations we support are facing,” said Alfredo Ramirez, CEO of Vyopta.

We now know that remote-only and hybrid meetings are the new normal. In fact, just 27% of executives predict that half or more of their internal meetings in the next 12 months will be in person only. Instead, executives anticipate an average of 38% of their internal meetings over the next 12 months will be solely virtual—and another 29% on average will be hybrid in-person and virtual.