ESET researchers present their analysis of all malicious frameworks used to attack air-gapped networks known to date. An air-gapped network is one that is physically isolated from any other network in order to increase its security. This technique can help protect the most sensitive of networks: industrial control systems (ICS) running pipelines and power grids, voting systems, and SCADA systems operating nuclear centrifuges, just to name a few. 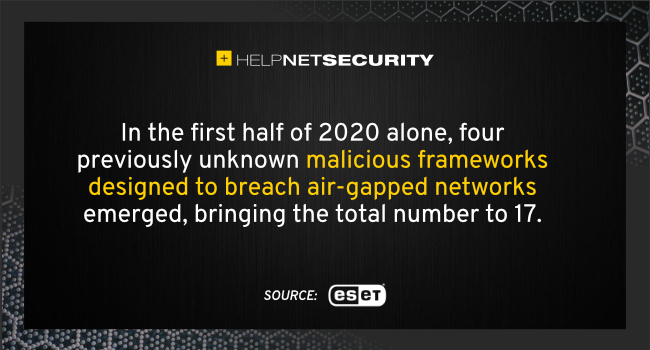 Naturally, systems that run critical infrastructure are of high interest to numerous attackers, including any and all APT groups. APT groups are typically sponsored by or part of nation-state efforts. Ultimately, if an air-gapped system is infiltrated, these threat actors can intercept confidential data in order to spy on countries and organizations.

In the first half of 2020 alone, four previously unknown malicious frameworks designed to breach air-gapped networks emerged, bringing the total number to 17.

The challenges of discovering and analyzing this type of framework

Discovering and analyzing this type of framework poses unique challenges as sometimes there are multiple components that all have to be analyzed together in order to have the complete picture of how the attacks are really being carried out.

Using the knowledge made public by more than 10 different organizations over the years, and some ad hoc analysis to clarify or confirm some technical details, researchers put the frameworks in perspective to see what history could teach cybersecurity professionals and, to a certain extent, even the wider public about improving air-gapped network security and our abilities to detect and mitigate future attacks. They have revisited each framework known to date, comparing them side by side in an exhaustive study that reveals several major similarities, even within those produced 15 years apart.

“For organizations with critical information systems and/or classified information, the loss of data could be hugely damaging. The potential that these frameworks have is very concerning. Our findings show that all frameworks are designed to perform some form of espionage, and all the frameworks used USB drives as the physical transmission medium to transfer data in and out of the targeted air-gapped networks,” explains Dorais-Joncas.

With the risks identified, ESET has put together the following list of detection and mitigation methods to protect air-gapped networks against the main techniques used by all the malicious frameworks publicly known to date:

In addition, it is worth noting that endpoint security products are generally able to detect and block several exploit classes, so having such technology not only deployed but also kept up to date could have a positive impact.

“Maintaining a fully air-gapped system comes with the benefits of extra protection. But just like all other security mechanisms, air gapping is not a silver bullet and does not prevent malicious actors from preying on outdated systems or poor employee habits,” comments Dorais-Joncas.