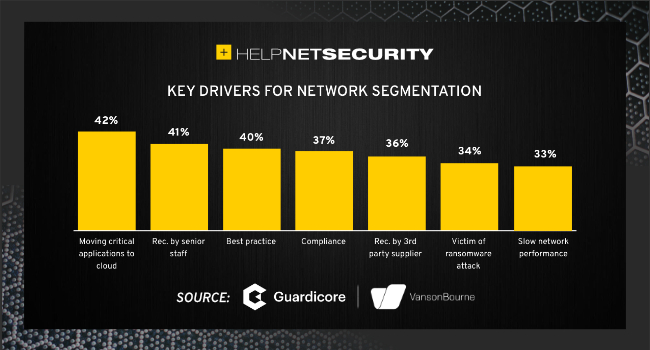 The research surveyed 1,000 IT security decision-makers across seven countries, detailing current trends in segmentation across enterprises and the security advantages associated with strong segmentation implementations.

Segmentation is an IT approach that separates critical areas of the network to control east-west traffic, prevent lateral movement, and ultimately reduce the attack surface. Traditionally, this is done via an architectural approach – relying on hardware, firewalls and manual work. This can often prove cumbersome and labor intensive, which is a contributing factor in 82% of respondents saying that network segmentation is a “huge task.”

The benefits of implementing network segmentation

The research finds segmentation strategies are often limited in breadth and depth, in part due to the reasons mentioned above. Modern segmentation uses a software-based approach that is simpler to use, faster to implement and is able to secure more critical assets. The research shows that organizations that leverage the latest approach to segmentation will realize essential security benefits, like identifying more ransomware attacks and reducing time to mitigate attacks.

“The findings of the report demonstrate just how valuable a strong segmentation strategy can be for organizations looking to reduce their attack surface and stop damaging attacks like ransomware,” said Pavel Gurvich, SVP, Akamai Enterprise Security.

According to the survey, organizations faced an average of 43 ransomware attacks in the last 12 months. 14 of those attacks reached the stage of lateral movement, demonstrating that the segmentation protections organizations have in place are not as strong as they could be.

43% of respondents say that network segmentation has either not occurred in their organization or not in the past two years. These statistics are meaningful, given the significant and sudden global shift to hybrid cloud environments as businesses adapted to remote work due to COVID-19.

Based on the data, it’s possible that misconceptions around traditional segmentation approaches prevented security leaders from implementing segmentation projects in their new hybrid cloud environments. Fortunately for organizations, modern software-based approaches to segmentation are much easier to implement in these new IT environments and provide greater security benefits like north-west traffic control and process-level details.

Further, the average time required to limit lateral movement and prevent ransomware attacks entirely is lower on average for organizations with greater use of segmentation to protect their critical assets.