A PSA Certified report predicts that this year will mark a turning point in securing the Internet of Things (IoT), as the industry collectively commits to addressing the historic lag between the rate of digital transformation and the speed of securing the ecosystem. 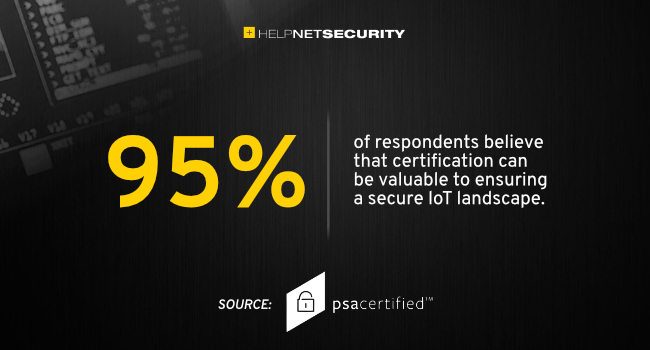 The annual barometer of industry perceptions and intentions around IoT security surveyed 1,038 technology decision makers across Europe, USA, and APAC, and signals a positive turning point for security with organizations placing it at the center of IoT strategy and organizational culture.

90% of respondents have increased the importance placed on security in the past 12 months, almost 9 in 10 deem security in their top three business priorities and 42% of those rank building a ‘security-first culture’ as their top organizational priority.

The study indicates that increased consumer expectations and growing cyber risk are largely driving the change. Debunking the myth that consumers are purely driven by product features and price, 83% of respondents state they look for specific security credentials when buying connected products. Over a third of companies believe distributed working has increased the likelihood of an IoT hack and one in five respondents work for companies that had been victims of hacks due to vulnerabilities in third-party products or services.

Not only is a security-first culture deemed critical to protecting businesses against cyber-risk, it’s also recognized as a driver of commercial value. 96% of tech decision makers say that having security in their products positively impacts the bottom line, with nearly seven in ten citing they can charge a premium for built-in security.

Over half of respondents believe IoT security implementation makes people more likely to trust their products, four in ten claim that it helps them differentiate their product, enabling them to sell and ship in larger volumes.

Despite almost universal acceptance that IoT security commands a premium, nearly a third of those asked identified cost as inhibiting them from implementing stronger security, while perceived expense and a lack of ROI were the biggest barriers to conducting external lab testing. Only 31% of technology decision makers feel “very satisfied” with their level of security expertise in-house and ‘a lack of security specialists’ ranked in the top three barriers to IoT security.

“IoT security has moved well beyond the stage of early adopters and the direction of travel is clear: security is foundational, not optional,” said David Maidment, senior director, Secure Devices Ecosystem at Arm. “This report is an important reminder that security must be integrated into every device, process, company and culture if we are to take advantage of its potential as an enabler of digital transformation – and that continued industry collaboration around security best practice is critical to driving this forward.”

The desire for guidance is higher than ever: 96% say they would be interested in an industry-led set of guidelines on IoT best practices – a considerably higher finding than the 84% in 2021. Security frameworks and step by step guides were ranked as the most useful tools for deploying secure products to market, underlining the criticality of education and support in shaping a more secure IoT.

The findings from the report also point to the need for a common language around security. Three quarters of respondents look for specific security credentials when buying on behalf of their company, but 68% admit that they don’t know which to look for.

With 59% of respondents admitting that internal validation is relied upon to certify security implementations, third-party certification will provide a clear marker of security across the value chain and 95% agree that it can be somewhat valuable to securing the IoT. More importantly, nearly a third of respondents claim customers and end users are demanding it, 34% find it benefits reputation, and 39% think it improves product security.

Maidment continues: “Security concerns represent the biggest perceived risk to successful digital transformation according to our research. Yet, the cost of IoT insecurity remains higher than it’s ever been. As we reach a positive turning point for IoT security, best practice guidelines, a common language around security and the use of trusted components will help streamline costs and further level the security playing field in 2022.“