Truecaller announced a research conducted in partnership with The Harris Poll in March of 2022, and the findings detail trends/insights on the impact of spam and phone scams that have increasingly permeated the U.S. over the last 12 months. The study estimates that a staggering $39.5 billion was lost to phone scams this past year, which is the highest number recorded since Truecaller began researching scam and spam calls in the U.S. eight years ago. 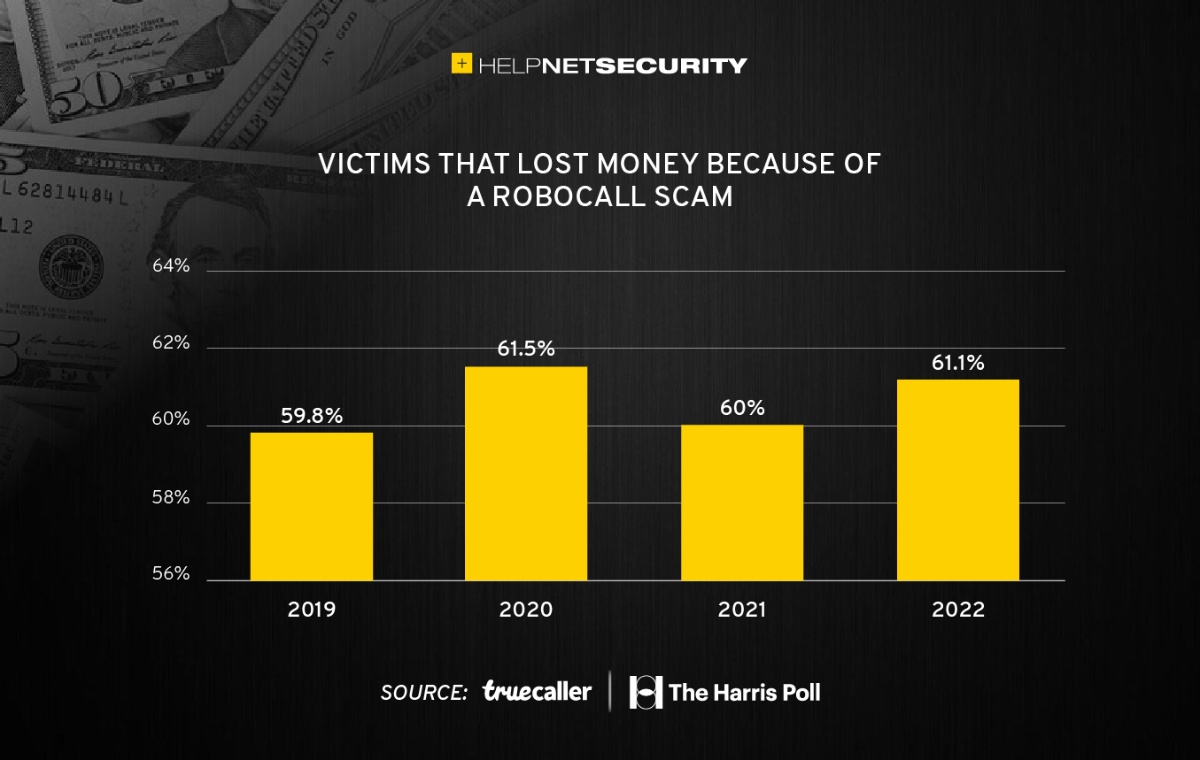 According to the study, 33% of Americans report having fallen victim to phone scams, and 20% on more than one occassion. Of those who lost money to phone scams in the last year, the average reported loss was $577, up 14.94% from the average in 2021 of $502, and robocallers were reported to have duped 61.1% of these people.

The research indicates that despite Federal Communication Commission’s (FCC) efforts to regulate via the STIR/SHAKEN framework (a set of FCC standards aimed at protecting Americans from robocalls/scammers) about 68.4 million Americans fell victim to a phone scam in the last 12 months, indicating scammers are sidestepping government regulation and finding more clever ways to defraud victims.

The impact of spam and phone scams

Men get scammed more than women

Seniors and Hispanics are targeted disproportionately

Sadly, American seniors (65+) reported a higher average of monthly spam calls and texts than their younger counterparts compared to a year ago and the largest target for spam texts are males over the age of 65. Additionally, Hispanics – although they received less spam calls and texts overall – are more likely to have fallen victim to phone scams in their lifetime. A staggering 74% of Hispanic respondents have lost money to a robocall, compared to the Black (43%) and White (65%) adult populations.

Around 63% of Americans feel like they may miss legitimate calls because they suspect they are spam and do not answer. When scammed, 43% of people reported they downloaded a spam blocker and/or caller ID app to further protect themselves. That said, 25% of respondents reported that they missed legitimate commerce calls due to brute-force blocking; i.e. extreme or inaccurate spam filtering – proving many spam filters are not working accurately or effectively. This also hints that improved caller ID, more precise spam analytics, and future innovation within call screening is important to improving the communication environment.

Neighbor spoofing is on the rise despite regulation

Neighbor spoofing, i.e. the act of spam calling someone with their same area code, increased over the last year with 51% of respondents answering they’ve seen an increase in these types of clever robocalls. While there have been measures taken to hinder this type of spoofing, only 7% of respondents said they saw a decrease in same area code robocalls over the last year.

Spamming has created distrust in the phone call

A whopping 86% of Americans said they try and only answer calls if they can identify the person or business they are calling from. Additionally, 60% of Americans prefer to use other methods for communicating – such as text, social media, apps, and email – to avoid phone calls altogether. Modern forms of communication that require less immediacy are increasingly preferable.

Younger adults preferred to take action by downloading Spam Blocker/Caller ID apps while people above the age of 65 preferred canceling their credit cards/changing account numbers after being defrauded. Additionally, the report saw that higher income groups were more likely to take action after losing money to a phone scam.

“The findings from this year are concerning and shed light on the fact that fraudsters and scammers continue to outsmart increased government regulation. Additionally, with many robocalls coming from overseas, the increase in regulation will need to work in parallel with technological advancements provided by caller ID and spam-blocking apps, such as Truecaller,” says Alan Mamedi, CEO at Truecaller.