Businesses and consumers are relying on the voice call more than ever during the pandemic with voice traffic up 184% in 2020 compared to 2019, according to a Hiya report. 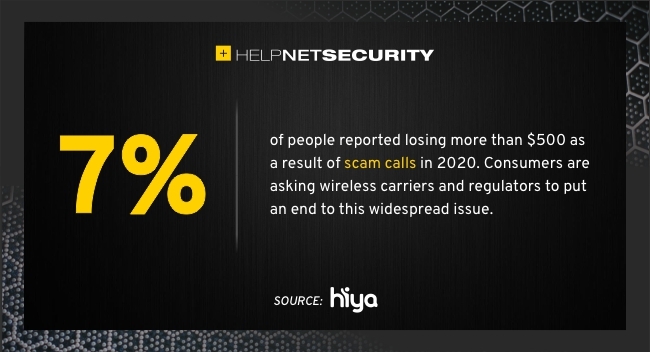 However, this increase in voice calls is being exploited by scammers who are stealing money from unsuspecting victims and damaging trust in one of the most relied-upon communication channels.

Not only are these calls irritating and confusing, but there are significant economic consequences. Nearly 40% of all respondents reported losing money to phone scams in 2020 – with an average of $182 per person. And more than 7% of Americans reported losing more than $500 to phone scams last year – at a time when businesses are closed and people are losing their jobs as a result of the pandemic.

It can be difficult to spot a scam call. One of the common tactics scammers use is to spoof a legitimate business’ phone number and exploit their customers.

44% of the US consumers surveyed are regularly targeted by these spoof calls, with larger businesses typically spoofed more than SMEs. This is having negative consequences on businesses, too, with 48% of consumer respondents reporting they are suspicious of subsequent calls coming from a business that has been spoofed.

The voice call is now more important than ever

This damage to consumer trust is coming at a time when businesses are even more reliant on voice calls to connect with customers. According to the survey, more than 72% of US professionals surveyed increased their use of voice in the past 12 months. In addition to operating in a contactless society, this increase in voice usage is also due to consumer preference.

Consumers surveyed indicated they prefer the voice call over all other communication channels for personal and professional interactions, beating out email, text, instant messaging, and video calls.

Businesses are consequently missing out on the opportunity to connect with their customers. More than 47% of US professionals surveyed said that their business has been negatively impacted as a result of not being able to reach customers by phone, with sales being the most negatively impacted area.

What’s even more concerning is that customer satisfaction (43% of respondents) and cash flow (36% of respondents) were also among the areas most negatively impacted by the decline in customers picking up the phone.

The time is now for action

48% of all Americans surveyed want to see regulators address the issue of spam and fraud calls. Nearly 42% of respondents want their wireless carrier to put an end to the problem, while 37% of consumers want the businesses who are being falsely impersonated by scammers to address the problem.

Hiya CEO Alex Algard said: “The unprecedented events of the past 12 months mean the voice call has become an even more essential connection point for both businesses and the general public. Businesses are using the voice call more than ever to reach customers and people are picking up the phone to connect with friends, family, and colleagues.

“At the same time, this crucial communication channel is being hijacked by hackers and scammers, exploiting our need to feel connected and informed. Everyone is negatively impacted by this surge of scam calls and it is time for wireless carriers, regulators, and businesses to tackle this issue before it escalates further.”