A global research commissioned by Cohesity reveals that nearly half of respondents say their company depends on outdated, legacy backup and recovery infrastructure to manage and protect their data. In some cases, this technology is more than 20 years old and was designed long before today’s multicloud era and onslaught of sophisticated cyberattacks plaguing enterprises globally. 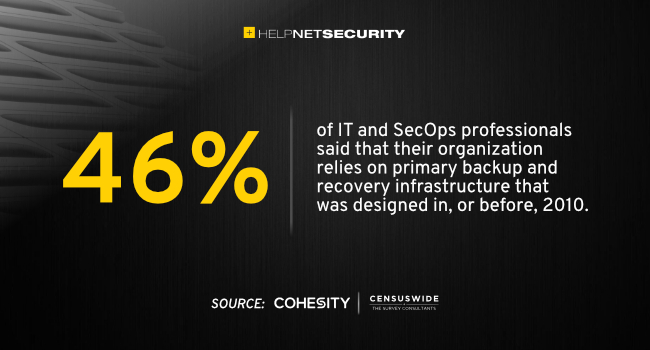 These are just some of the findings from an April 2022 survey, conducted by Censuswide, of more than 2,000 IT and SecOps professionals (split nearly 50/50 between the two groups) in the United States, the United Kingdom, Australia and New Zealand. All respondents play a role in the decision-making process for IT or security within their organizations.

“IT and security teams should raise the alarm bell if their organization continues to use antiquated technology to manage and secure their most critical digital asset – their data,” said Brian Spanswick, CISO, Cohesity.

“Cyber criminals are actively preying on this outdated infrastructure as they know it was not built for today’s dispersed, multicloud environments, nor was it built to help companies protect and rapidly recover from sophisticated cyberattacks.”

Backup and recovery infrastructure for managing data could be considered outdated

Enterprises are utilizing this legacy technology despite the fact that managing and securing data environments has become much more complex, not just because of the exponential growth in structured and unstructured data, but because of the vast array of locations where that data is stored. Forty-one percent of respondents stated that they store data on-premises, 43% rely on public cloud storage, 53% utilize a private cloud, and 44% have adopted a hybrid model (some respondents are using more than one option).

“In 2022, the fact that any organization is using technology to manage their data that was designed in the 1990s is frightening given that data can be compromised, exfiltrated, held hostage, and it can create massive compliance issues for organizations,” said Spanswick.

“In this survey, we easily found nearly 100 respondents who said their organizations are relying on outdated data infrastructure, and this raises the question, how many other businesses are in the same situation around the world?”

What keeps IT and SecOps teams up at night

Respondents highlighted what they believe would be their biggest barriers to getting their organization back up and running after a successful ransomware attack. The findings are as follows (respondents were asked to check all that apply):

With respect to the lack of coordination between IT and Security, this coincides with other findings from this survey denoting that a gap often exists between IT and SecOps that puts businesses and security postures at risk.

What do survey respondents want management to prioritize

Respondents revealed that modernizing data management, protection, and recovery capabilities, in addition to increasing collaboration between IT and SecOps, offers a path to strengthening their organizations’ security postures and multicloud operations. The top five “must have” measures that respondents would ask management for in 2022 are:

“Both IT decision-makers and SecOps should co-own the cyber resilience outcomes, and this includes an evaluation of all infrastructure used in accordance with the NIST framework for data identification, protection, detection, response, and recovery. Also, both teams need to have a comprehensive understanding of the potential attack surface,” said Spanswick.

“Next-gen data management platforms can close the technology gap, improve data visibility, help IT and SecOps teams sleep better at night, and stay one step ahead of bad actors who take great delight in exfiltrating data from legacy systems that can’t be recovered.”