Group-IB has noted a fivefold increase in the number of domains used for crypto giveaway scams that involve fake YouTube streams in the first half of 2022. In addition to Vitalik Buterin, Elon Musk, and other crypto celebs, scammers started exploiting the name of Nayib Bukele, the president of Salvador. 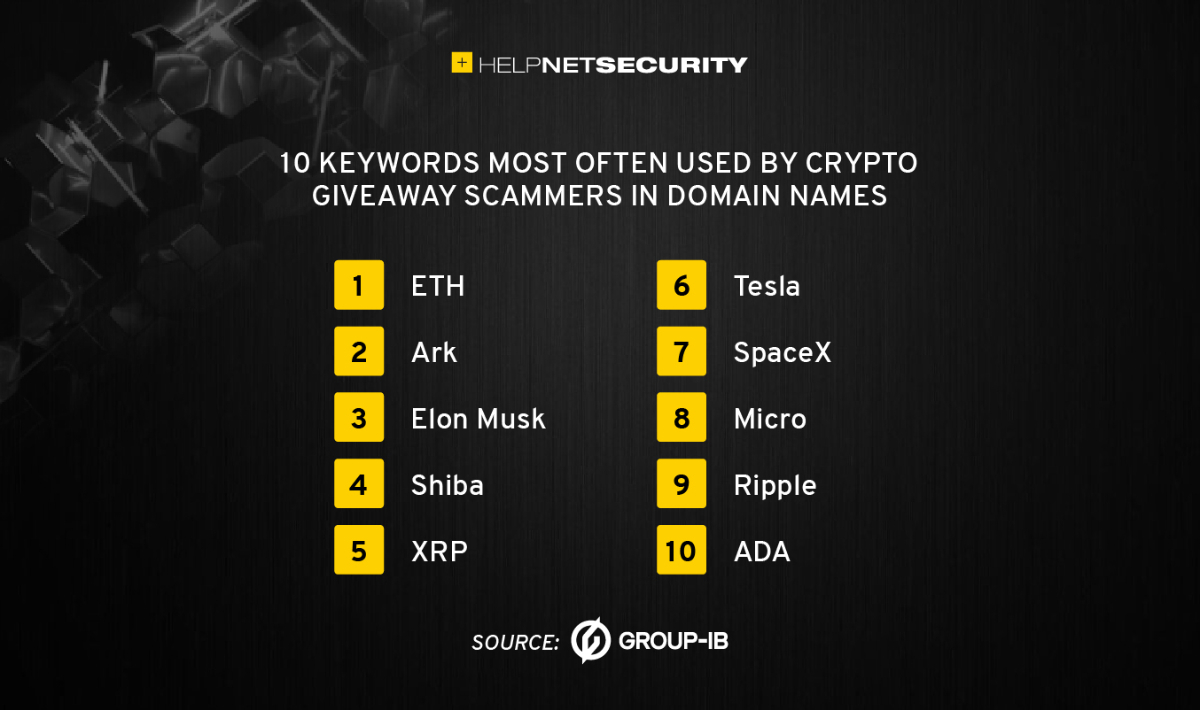 The evolution of crypto giveaway scams

Crypto giveaway scams have evolved into an illicit market segment with multiple services that aim to facilitate fraudulent operations. According to Group-IB, 63% of the new fraudulent domain names were registered with Russian registrars, but the fake websites are primarily designed to target English and Spanish-speaking crypto investors in the US and other countries. The researchers also compiled a list of the most popular keywords used by scammers in fake domain names.

Researchers observed an increase in the number of fraudulent YouTube streams “featuring” big names such as Brad Garlinghouse, Michael J. Saylor, and Cathie Wood in February this year. The scammers used the footage of famous entrepreneurs and crypto enthusiasts to encourage users to visit a promotional website to double their crypto investment — by transferring crypto to the specified address or disclosing the seed phrase of their crypto wallet to receive even better terms.

Group-IB experts have discovered that the scheme has been scaled significantly in just half a year. In the first six months of 2022, they identified more than 2,000 domains registered explicitly to be used as fake promotion websites. This figure increased almost five-fold compared to the second half of 2021 and 53-fold in comparison with H1 2021. As reported earlier, in the first quarter of 2022 (Jan-Mar), researchers discovered 583 fake websites involved in the scheme. In the second quarter, the team found more than 1,500 more new domains set up by scammers to promote fake giveaways.

According to Group-IB, over 60% of scam domains involved in the scheme were registered via Russian domain name registrars. However, such resources usually use generic top-level domains because they are designed to steal cryptocurrency from English-speaking users. All content on fake websites is in English and sometimes in Spanish. The top five most popular domain zones used by scam websites promoting crypto giveaways include .com (31.65%), .net (23.86%), .org (22.94%), and .us (5.89%).

The primary source for attracting traffic to scam websites is YouTube, with Twitch and crypto streaming platforms trailing behind. On average, the number of viewers of fake streams amounts to between 10,000 and 20,000, including bots. To set up a fake stream, threat actors either highjack YouTube accounts themselves using dedicated stealer tools or buy/rent accounts on underground forums for a percentage of the stolen funds, which in most cases is between 10% and 50% of the streamer’s earnings. The price of a lot on the account exchange largely depends on the number of subscribers. The more subscribers a channel has, the more complaints it will take for the platform to block it. Among the accounts recently compromised or hijacked by crypto scammers, one was created in 2011 and had over 50,000 subscribers.

After gaining access to a legitimate account, a fake crypto streamer renames the channel, deletes all the previously uploaded videos from the playlist, changes the user pic, adds new design features, and uploads relevant crypto-related content. When fraudsters start a stream, they use viewer-boosting tools to make it to the recommendations of their target audience. On average, attracting a thousand viewers would cost scammers $100, while five thousand are priced at $200.

A marketplace for crypto scams

Group-IB revealed that forums used by scammers make up a full-fledged marketplace that can help even first-time non-tech-savvy scammers carry out a crypto fraud scheme. It is of note that most of these forums are Russian speaking. Scammers have the following at their disposal: an exchange platform for hacked YouTube accounts, viewer boosting services, manuals, website editors, admin panel developers, domain names, bulletproof hosting, and tools and people who can create deepfake videos. These mentors, designers, promotion specialists, and miscellaneous contractors charge an advance payment plus a percentage of the stolen funds.

The most popular service is crypto stream design. The average price ranges between $100 and $300, depending on the scope. Production of a deep fake video showing a celebrity would cost around $30.

Another high-demand service is the development of fake promo websites designed to show visitors the mechanism behind a fake giveaway. The price of a landing page can range from $200 to $600, depending on the relevance of the design.

Manuals typically start from $100. In some cases, the price is a combination of a flat rate and a percentage of earnings. There are also two-in-one offers that sell both manuals and training for a percentage of the stolen amount. Scammers can also buy toolkits designed to automate fraudulent operations. A subscription to an advanced toolkit ranges between $500 and $1,500 per month.

“Scams targeting crypto enthusiasts are becoming increasingly common, and their scope and sophistication are growing,” comments CERT-GIB. “Crypto giveaway scams have evolved into a profitable illicit market segment. Small-time scammers and more advanced cybercriminals band together, allowing them to automate and streamline operations.”

Users are advised to be vigilant about free giveaways and not to share confidential data on rogue websites. Double-check the legitimacy of the streams and the websites you visit using official sources only. If you cannot find any information about the promotion taking place, you are likely being deceived. Seed phrases must be kept secret and stored securely. To do so, use password management tools. To minimize the risk of leakage, prioritize desktop solutions over cloud-based ones. You risk being deceived twice if you have already transferred your crypto to fraudsters and want your money back. People who message victims on forums offering help often turn out to be scammers themselves.