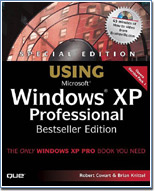 In the information era, the number of improvements in operating systems grows rapidly. Fighting with our time, working all day, we spend hours and hours learning to cope with new technologies and the need for information and the need for books. Differencing quality from quantity, I present you this beginner’s complete reference for the newest end user Microsoft operating system.

Robert Cowart has written more than 35 books on computer programming and applications, with more than a dozen on Windows. His titles include Windows NT Unleashed, Mastering Windows (3.0, 3.1, 95, 98 and Me). He has written on a wide range of computer-related topics for such magazines as PC Week, PC World and taught programming classes at the University of California.

Brian Knittel has been a software developer for more than 20 years. After doing graduate work in nuclear medicine and magnetic resonance imaging technologies, he began a career as an independent consultant. An eclectic mix of clients have led to long-term projects in medical documentation, workflow management, real-time industrial system control, and most importantly, 1 years of real-world experience with MS-DOS, Windows, and computer networking in the business world.

As you might know, Windows XP comes in two versions: Home Edition and Professional. This a book that addresses the specific needs of any beginner as it contains more advanced management and networking features, anticipating that some home users will choose the Professional version. The authors presume that the reader is not an engineer since they use plain English and they don’t focus just on the gee-whiz side of technology, but on what you should care, what you can get from it and what you can forget about.

The book is broken down into six major parts. The first part introduces Windows XP and explains its features, the graphic user interface (GUI), the design and architecture behind Windows XP. They start with a quick overview of Windows XP and here you see what’s new. In the Windows versus Linux section the authors tried to compare the two but found it rather difficult for several reasons. The note some of the new security features present in the latest version of Windows.

The second part teaches you how to use this new interface by guiding us through it. Here the authors discuss using simple applications, printing, logging and also some tips on how to work efficiently. In any case, if a user has worked on previous versions of Windows for home users (95, 98, Me), crossing on a new environment can be difficult. So, once you are familiar with it, you’ll wonder how you ever got around in those old clunky environments. This part of a book can be your reference guide for the interface, running programs, organizing data and sharing. Also covered here are digital imaging tools and video editing.

In opposite of the second part, the third part is much bigger and more interesting as it discusses Internet and TCP/IP connections. To configure them properly, reading this chapter should be enough. Even the hosting web pages with Internet information service (IIS 5.1) or conferencing with Windows Messenger is described here. In the end, they covered some hardware problems with modem (its very known how micro modems work and how are they supported), connectivity problems and some other internet troubleshooting resolving with Windows TCP/IP utilities like ipconfig, tracert, pathping, route, etc.

The fourth part of the book is all about Windows networking. Starting with some basic concepts and connection technologies the authors counted every network service you can find in Windows XP. One title is “Tips from the Windows Pros: Become a Networking Professional”. Here you can find all things that consider creating a home and business network. When talking about network types they cover cable, wireless as well as Remote Desktop and Remote Assistance which I find very useful if you administer many networks.

The fifth chapter aids you with system configuration – tweaking the GUI and configuring via control panel applets. Here you find topics about maintaining and optimizing system performance. From various tweak utilities through registry keys which we can “easily” configure. Most of it is only improving our desktop with various colors and themes, crunching our disks and eating memory.

Windows XP is something that has to be administered and maintained. The last chapter discusses maintenance and administration. Managing users, hard disks and other devices, using device manager. If you dare to replace some hardware, you can learn how to install it painlessly. They also talk about multibooting with other operating systems, especially with Linux as well as editing boot.ini and master boot record. In the last chapter we find things like the registry and repair using recovery console and boot disks, backup and troubleshooting. The last few pages discuss new features in service pack 1 and how to install it.

The CD-ROM included with this book has more than 45 minutes of video lessons. So, if you like this CD-ROM, you can buy another which is called “Windows XP CD-Extra” from Brainsville.com. In my opinion the CD is good enough for any beginner and may be useful for you to learn things by video. I think that it’s easier to learn something when you are guided through it, than reading it from paper. The titles covered on the CD are “The new XP interface”, “Customizing the interface”, “Setting up your home network”, “Configuring your network” and “Checking your network”.

Despite the author’s claim that this book is the only one you need to buy if want to learn about Windows XP, I can say that it is good, but certainly not enough. The book is big and good enough to learn the basics but if you need more, you’ll have to search elsewhere. In this case I think it’s better to have more books on your bookshelf.