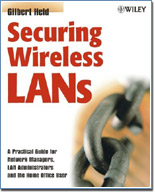 A couple of days ago the WI-FI Alliance finally announced that after almost one year of detailed testing, more than 175 products from some of the leading wireless manufacturers, received WPA certifications. The majority of wireless users won’t immediately buy the new hardware, so they are stuck with the equipment they are currently using. The current state of wireless security is the topic of the book I’m taking a look at this time.

Gilbert Held is an internationally known award-winning author and teacher with over 30 years in experience in managing communication networks. Some of his previous books include “Bulletproofing TCP/IP Based Windows NT/2000 Networks”, “Quality of Service in a Cisco Networking Environment” and “Ethernet Networks, 4th Edition”.

The book starts with some introductionary concepts that are presented to get the readers acquainted with the basics of wireless networking, as well as some initial Wireless Local Area Network standards.

After introducing the readers with some typical basics, Held goes a bit deeper into making them understand the way the data is transported over wireless networks. The author notes that this should ultimately be used for better realizing the threats to WLAN networks and the ways to secure them. After inspecting the different frame formats, Held discusses wireless signals, an important topic for all WLAN deployers.

Altought WEP gets mentioned earlier while taking a look at frame formats, its importance in the current WLAN installations, secured it a whole chapter for discussion about its (in)security. Not like the other authors who immediately diss WEP, the author points out that WEP wasn’t meant to be the ultimate security mechanism, but was rather created to provide wired equivalent privacy – which doesn’t in any way mean such a strong encryption everyone expected from it. With this on your mind, combined with some tips on optimizing WEP usage, the majority of WLAN networks can provide a relatively secure environment. Over about 35 pages, Held discusses both passive and active WEP weaknesses and the ways to exploit them.

The fifth chapter is the place where the reader can go deeper into the actual security issues that surround wireless users. It was nice to see that besides the “standard” issues, the author covers some situations which I didn’t see discussed in other similar books – open shares on client computers and need for personal firewalls while residing inside a WLAN. Although this doesn’t seem special, you would be surprised how many WLAN network administrators consider security measures, but don’t spare a minute thinking about client security.

What follows next is a chapter that, from my perspective, should have been placed before the previous chapter, as it deals with standards based security. 802.1x examples provided here are based on the Windows operating system and Cisco wireless gear. What follows next is a brief sub-section on Virtual Private Networks (VPNs), tunneling protocols and evolving encryption.

The majority of the book sections are accompanied with screenshots, which, besides some irrelevant product and web site shots, suite the text very well.

The book closes with a 2 page appendix that gives the new WLAN deployers a simple security checklist that is based on the topics covered throughout the book.

Most of the books that focus on WLAN security are organized on the same way and deal with approximately the same security issues. The difference is that each of these books has some shiny moments that are derived from the authors subjectivity on the topics he/she wants to cover. In “Securing Wireless LANs”, Held brings a number of especially technical themes and transforms them into an easily readable material for all types of readers. Some parts of the book remind me of the “Hacking Exposed” titles – not because of the similarity in content, but rather in the book’s composition. This can especially be seen from the latter chapters, where the author categorizes security issues and techniques on a brief introductionary summary, overview and closing part which is either concentrated on specific issue countermeasure or a technique limitation.

When you are buying a book on a specific technical topic, you surely want it to be a vendor neutral. Altought the book’s beginning chapter contains solely SMC product screenshots, later the author uses Cisco and Agere Systems’ products to depict particular points of interest. Besides discussing some Linux/Unix software tools, from the operating system point of view Microsoft Windows are put in the spotlight.

I usually never comment the book’s price, but this time I should do it because of a simple reason – I’ve ordered this book primary because it was listed on Amazon.com with a $55 price tag. After seeing the price, I’ve told myself that it is probably because the book is either a massive 1000 pages long book or a relatively long hardcover accompanied by a CD. Unfortunately, from the technical characteristics point of view, the book isn’t anywhere close to my initial ideas, but is a rather slim, paperback 250 pager. This is really bad for the book, as it is one of the better introductionary wireless security books I’ve stumbled upon, but the price tag will surely drive away a number of potential buyers.

The bottom line is that “Securing Wireless LANs” is a publication that will be of a great use to wireless newcomers and intermediate readers, as it will basically introduce them with all the stuff they should think about while deploying a wireless LAN in a secure manner.