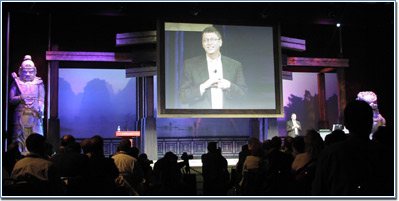 Bill Gates during his keynote speech at the RSA Conference 2004

In his keynote speech in San Francisco, Microsoft Chairman and Chief Software Architect Bill Gates addressed a number of concerns that are on the minds of many of the attendees.

He noted that the people who attack systems are becoming more sophisticated and underlined Microsoft’s efforts in increasing the security of the Windows environment. Gates said that he believes Microsoft has made a lot of progress in the last two years and that with the right tools and processes things will be even better.

What everyone is talking about is certainly the Windows XP Service Pack 2 (SP2) due to be released later this year. What SP2 will bring is the Windows Firewall (the successor of the Internet Connection Firewall), enhancements in Internet Explorer and a new feature – the Windows Security Center – a central place to check all the security settings.

Another hot topic the Microsoft chairman addressed was spam, something that he calls a “security threat”. “Having e-mail come in and not really being able to identify who it comes from is a huge security fault” said Gates. He noted that authenticating e-mail is a key initiative for Microsoft. Gates said: “Our goal is to get rid of spam”.

As always, some of the people at the conference were not that impressed with the keynote. Microsoft’s rival Sun Microsystems issued a news release in which Jonathan Schwartz, executive vice president of software, Sun Microsystems said: “Network security is not the oxymoron our competitor would like you to believe. But it’s time the industry admitted that the defensive approaches to PC security with bigger moats, taller walls and memos from the CEO have clearly failed.” 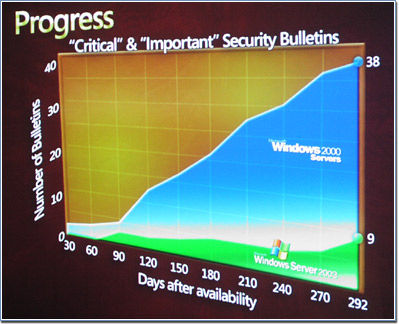